European IT Law Briefing: Taking action on misuse of social media by employees 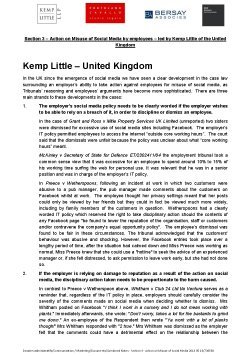 This briefing from leading European law firms highlights the key legal issues in France, Germany, UK and Italy companies should consider when taking action against employees misuse of social media. The briefing is based on a seminar by the law firms: SKW (Germany), Portolano (Italy), Bersay (France), at the offices of Kemp Little (UK) in London on 30th April 2013.