ERP moves onto the web 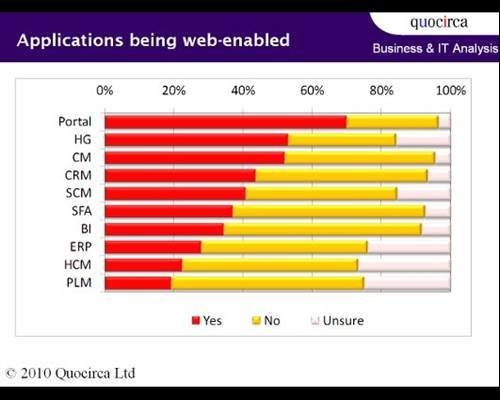 ERP moves onto the web

ERP is being web-enabled, but on a more modest scale. Businesses have been slower to web-enable their own ERP applications ahead of other, more obvious, candidates such as portals, content management and CRM, but even when Quocirca’s research was published, 25% had done so. The market for SaaS-based ERP has been growing, although vendors in this space admit it is complicated to build such applications. The best-known pure play SaaS-ERP vendor is NetSuite and the traditionally on-demand vendors are following, including SAP with its Business-by-Design product. So is there something holding back the market for SaaS-based ERP? There is a limiting factor, and this brings us full circle. Small suppliers do need to integrate with their larger suppliers’ ERP systems, but their internal processes and requirements will often be very different. Many will buy the ERP application that most suits their internal use and seek to integrate it with whatever applications are used by organisations they trade with.