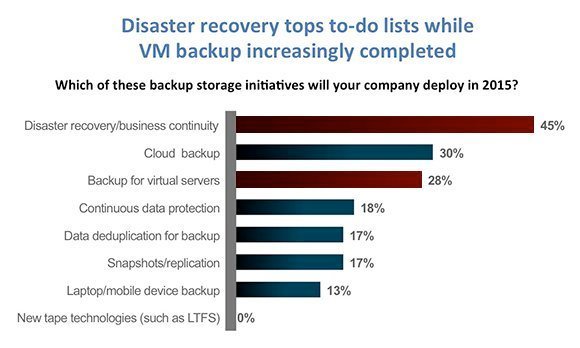 UK IT departments appear to have dealt with virtual server backup in increasing numbers while the number of disaster recovery deployments continues unabated. That’s according to the ComputerWeekly.com/TechTarget IT Priorities Survey for 2015, which questioned 111 UK IT professionals about planned IT spending priorities for 2015. This year virtual server backup is a key priority for 28% of respondents, a decrease from 36% in the 2014 survey, which was also down from 41.5% in 2013. Meanwhile, disaster recovery is a key project for 45% of those questioned, up a little on 2014, when 40% declared it their top priority, but in keeping with 2013’s figure of 44%.