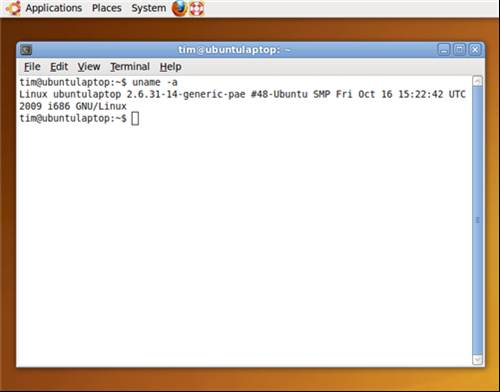 Finally, here is the Ubuntu terminal, friend of techies and source of dread to those brought up on the comforts of Windows. It is an opportunity to mention some of the changes under the hood, such as the kernel update to 2.6.31, the enhanced Ext4 file system, and the Grub 2.0 boot loader, all of which contribute to the faster boot time in this release. Looking at the terminal also prompts another question: at version Ubuntu 9.10, is this operating system ready for those who want to keep this firmly buried in Accessories? Maybe.

Long experience of Linux and Ubuntu tells me that from time to time there will be no alternative to patient Google searches and the typing of arcane commands to fix a problem or enable a device. That said, Ubuntu 9.10 is the smoothest release yet, with just the occasional ugly or home-made looking dialog to spoil the effect, and performance is excellent. Recommended.