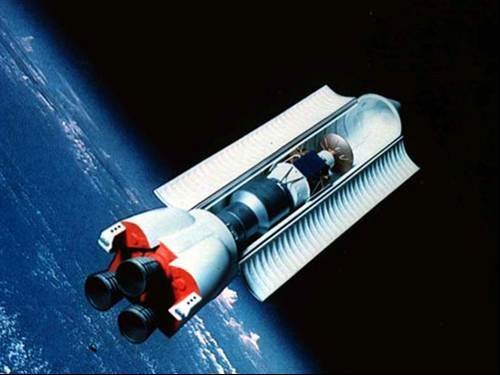 An unmanned cargo derivative of the shuttle, Shuttle-C was designed to replace the shuttle orbiter with a cargo pod atop an engine module. It was intended to carry heavier loads than the shuttle and perhaps hazardous ones (like liquid-fuel upper stages). There had been many earlier design studies, some with the same name, for shuttle-derived cargo vehicles. For a few years after the Challenger accident, NASA pursued work on the Shuttle-C project, with the initial aim of launching heavy space-station modules. But rising cost estimates for development and dwindling hopes for launch-cost savings gradually made the project look less worthwhile. Funding was zeroed out by Congress to help pay for the massive cost overruns of the space station. (Illustration: NASA-MSFC)