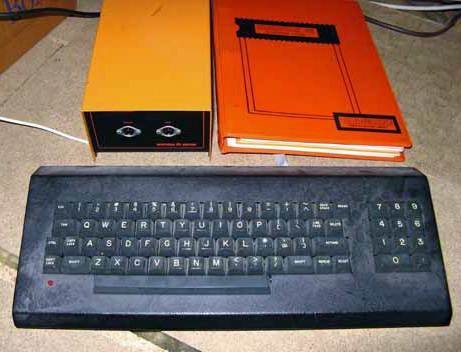 Chris says the Tangerine "had an NMOS 6502 running at 750 kHz, and 1 kbytes RAM. It was sold as a kit - a circuit board and components that you soldered together. The metal case was an optional extra, and the 'full QWERTY' keyboard an amazing luxury that I saved up to buy the following year - it cost £75 at the time. The original kit came with a hexadecimal keypad, which I still have but have mislaid. There was no storage facility, you typed in the hex programmes by hand. There was a simple monitor (called the 'bug') on a 1 K EPROM. I later bought an expansion board that contained a simple hex debugger and a utility that let you use a digital-to-analogue converter to output modulated audio so that you could store data to a tape recorder - at rates up to 2400 baud. The display was 32x16 characters, but you could program simple graphics. The longest program I ever typed in (not my own) was for Space Invaders: it took about two hours typing it in (my girlfriend used to read out the hex codes as I typ