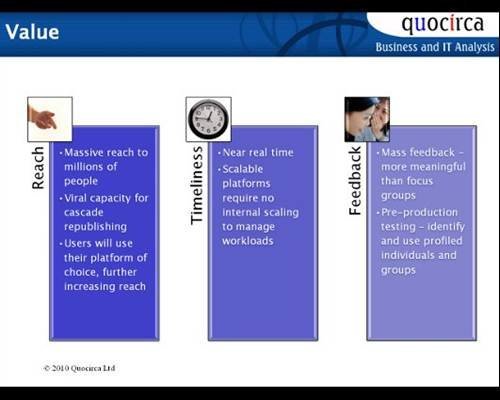 In terms of value the primary benefit social networking can bring to an organisation is reach. With Facebook having passed 500m users and Twitter somewhere around the 100m level (bearing in mind that some of these accounts will be duplicates and/or dormant), there are huge potential audiences. Many social networking sites work according to a “streamed content” model, where anything posted will be “of the moment”, with little value beyond a short period of time. However, content on sites such as YouTube and Flickr, aimed at video and image files, as well as specific types of content on Facebook have a longer shelf life, and other sites can point people to such content. Social networking also offers a means to gain and gauge user sentiment in a rapid and effective manner, and also to involve target audiences in the testing of ideas and/or products at an early stage through by issuing invitations across a broad audience.