Rebuilding the IDE in Visual Studio 2010 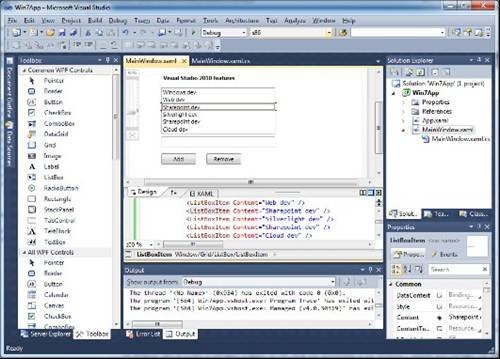 Rebuilding the IDE in Visual Studio 2010

At a high level, there are several themes in Visual Studio 2010. The first is the rebuilding of the integrated development environment (IDE) itself, using the .net Windows presentation foundation (WPF). This was a significant change, especially considering the history of WPF. The framework was introduced at the end of 2006 along with Windows Vista, promising rich hardware-accelerated graphics and smooth scaling on screens of different resolution. WPF uses an XML-based layout language called XAML, and was intended to replace the ancient GDI (graphics device interface) for defining a graphical user interface. Unfortunately, take-up of WPF has been slow because of compatibility and performance concerns. Microsoft has been slow to adopt WPF in Windows and Office, causing developers to question its quality.