Controllers at work in the old control room 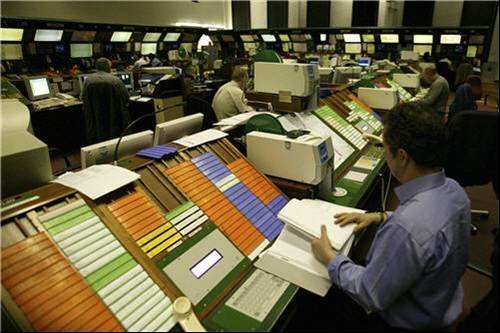 Controllers at work in the old control room

Plotting a flight’s route: Flight data, including its intended route, the type of aircraft, and its altitude, is currently printed out.

A series of empty spaces on the paper are used to record instructions passed to the aircraft or information received from it. Several strips of paper are used per aircraft, each relating to a different time and position.

The controller compares the positions of each flight at a given time, and builds up a mental model of where they all are. He or she tells any aircraft that might conflict to turn, climb or descend to resolve any problems. The paper strips are stored for about 30 days after the flight has passed through the airspace.

The technical version of this – the Electronic Flight Data (EFD) – is expected in the winter this year, and will allow information on each aircraft to be shared more easily between controllers. It will also make potential conflicts or unusual circumstances more obvious.