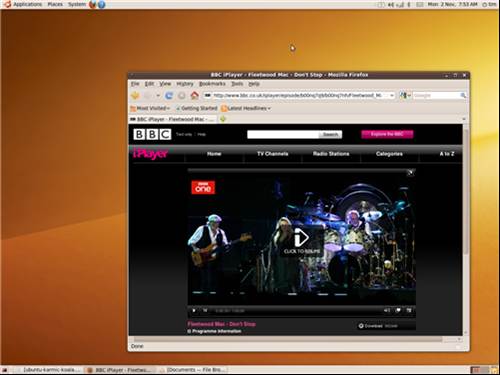 Ubuntu core applications are all free and open source, says the Ubuntu Promise [http://www.ubuntu.com/], but these high-minded principles can get in the way when it comes to delivering a smooth install. Out of the box, Ubuntu does not include Adobe's proprietary Flash player, breaking many web sites including the BBC's iPlayer, and nor can it play most commercial DVD, which are encrypted. Treading a fine line between principles and pragmatism, Ubuntu has an installation package called restricted extras, which adds MP3 support, Flash, Java, and most of what you need to play DVDs.

A further link explains how to install livdvdcss2 in order to play DVDs, with the proviso that you should "check with your local laws" before doing so. After installing restricted extras, BBC iPlayer worked perfectly.