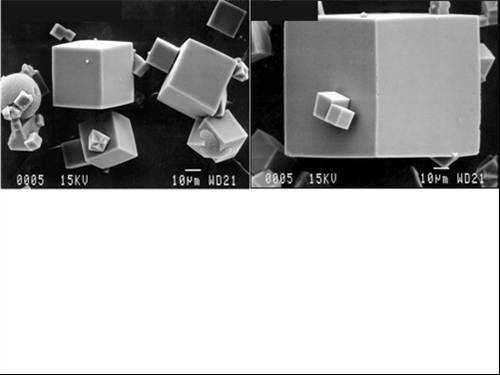 These cubes of the mineral zeolite show the difference between earth-bound crystal formation (left) and crystals grown in space (right).

That's because liquid-grown crystals feed on material dissolved in solution, leaving a less-dense liquid behind. On Earth, this liquid floats upwards, creating a convection current in experimental containers that introduces flaws and limits the size of crystals. The effect is virtually absent in microgravity.

Creating larger, purer crystals can reveal more about their basic structure and properties. Zeolite, for example, is full of microscopic pores that can be used to filter and store materials, such as hydrogen for use in future fuel cells.