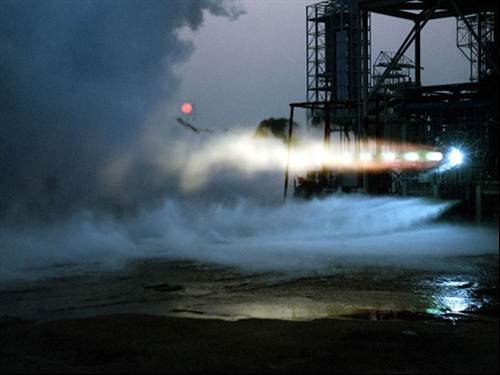 This was a joint NASA-US Air Force project for a low-cost shuttle-derived expendable launcher to replace existing expendable rockets, such as Atlas, Delta and Titan launchers. Congress cut its funding due to problems with cost and schedule, a hopelessly confused management structure, and the lack of a clear requirement for the system, since there was nothing obviously wrong with existing launchers and Congress was sceptical that the NLS would be significantly cheaper. After some fumbling, the US Air Force replaced it with the Evolved Expendable Launch Vehicle (EELV) programme that produced the Delta IV and Atlas V rockets. (The RS-68 engine that powers the Delta IV is probably derived from work on the "Space Transportation Main Engine" for the National Launch System.) In this image, a National Launch System engine is test-fired at a NASA centre. (Image: NASA-MSFC)