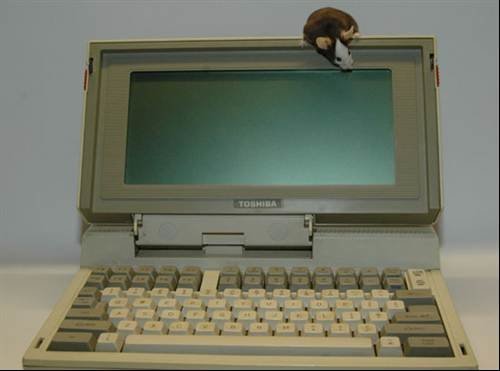 Eric Jukes 1985 Toshiba T1100 is pictured with a revolutionary new breed of mouse! Eric says: "Produced in 1985 the Toshiba T1100 is claimed to be the world's first mass-market laptop computer. This computer has a 4.77 MHz Intel 80C88 processor, MS-DOS 2.11 operating system, one 720-kilobyte 3.5-inch floppy disk drive, and has 512-kilobyte RAM. Note that this computer was not manufactured with a hard drive and nor was there any option for one - it was floppy only! The system was 12.2-inches wide, 2.6-inches high and 12 inches deep with a weight of just nine pounds! (A true brick!) This machine has the optional 14.4kbps modem connectivity. The US price was more than US$4,000 in 1985 - I think this one was about £1,500 in the UK. It was a monochrome display - not Windows - and had no mouse - but I've supplied one for these pictures!" There's more of Eric's Hereford mouse elsewhere in this gallery...