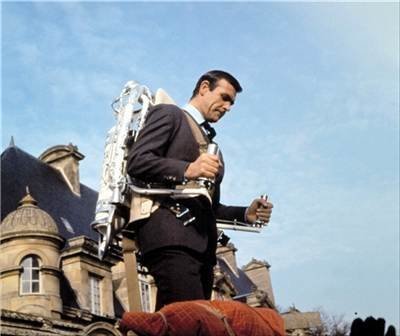 Not really a gadget but one of the more memorable personal devices that Bond has possessed. After killing Colonel Jacques Bouvar at a chateau, Bond uses the jet pack to return to his car, an Aston Martin DB5. The pack used was developed by Bell Aerosystems as the Bell Rocket Belt which only had a 20 second flying time using a hydrogen peroxide fuel. The scenes in Thunderball were shot using two stuntmen and the shrill sound of the jets was overdubbed with the sound of a fire extinguisher. In 1984, a Rocket Belt was used in the opening ceremony for the Olympic Games in Los Angeles. Jet packs may not have taken over the world but a mild solution of hydrogen peroxide on cotton wool can be used to disinfect and clean keyboards.