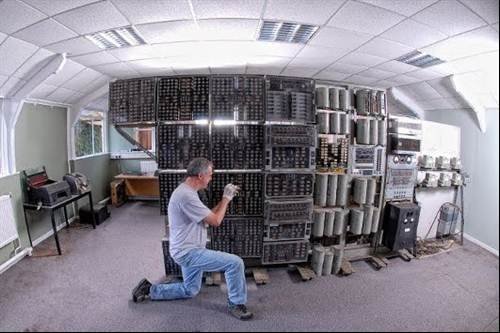 Project manager Tony Frazer begins the task of rebuilding the Witch. The Witch arrived in remarkably good condition after more than three decades of storage. He said, "We have assembled the frame and it now looks just as it did in its heyday in the 1950s and 1960s. Our first task is to see what we can do with the power supply – we dare not just switch things on as time will have taken a toll on the chemistry and physics of the unit."

Witch was used between 1951 until 1957 at the Atomic Energy Reserach Establishment to perform calculations. The machine has been loaned to The National Museum of Computing at Bletchley Park, where it is to be restored to working order as a Computer Conservation Society project.
View All Photo Stories