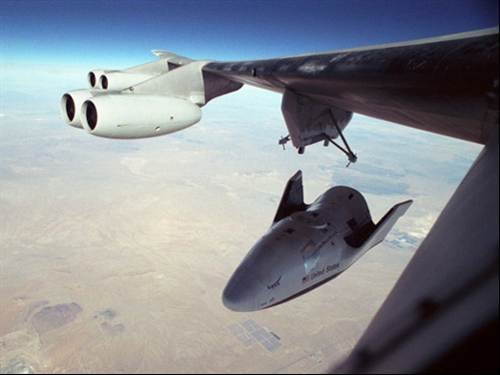 Meant primarily as a "lifeboat" for the space station, the X-38 was a wingless vehicle whose body shape was designed to provide some lift, giving it the ability to do controlled gliding flights and to be guided to a desired point before its parachute was deployed for landing. It was developed in-house at NASA's Johnson Space Center, with some later European involvement, but was cancelled as part of space-station revisions provoked by station cost overruns. It was replaced by the EELV-launched Orbital Space Plane (OSP), which eventually merged into the Constellation programme currently planned to replace the space shuttle. In this image, a prototype of the X-38 crew lifeboat drops away from a plane during a 13-minute test flight in late 2001. (Image: NASA-DFRC)