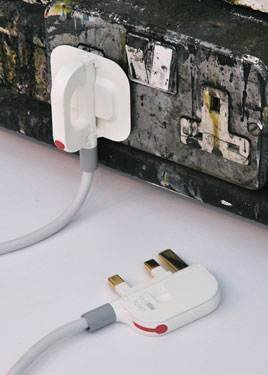 The British three-pin plug is a lot more bulky than two-pin equivalents. So Min-kyu Choi at the Royal College of Art in London, UK, has designed a folding version that saves space.

The folded plug is just 10 millimetres thick for maximum portability.

The 2009 International Design Excellence Awards (IDEA) competition winners have just been announced. Co-sponsored by BusinessWeek magazine and the Industrial Designers Society of America (IDSA), the awards are "dedicated to fostering business and public understanding of the importance of industrial design excellence to the quality of life and economy", says the IDSA.

Here are some of New Scientist's favourites from this year's awards, including a cookbook you can taste, shoes made from trash, and a genius cheese grater