An Apple ll (lt) and a Compaq - National Museum of Computing 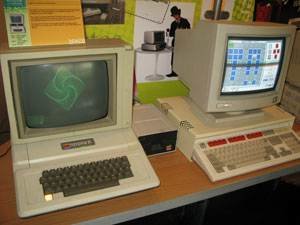 An Apple ll (lt) and a Compaq - National Museum of Computing

An Apple ll (lt) and a Compaq. Compaq, a Texas-based assembler, offered computers that were smaller, faster, better built and cheaper than IBM’s, which used the same Microsoft DOS operating system. Compaq eventually outsold IBM and was key to making Bill Gates’s fortune.