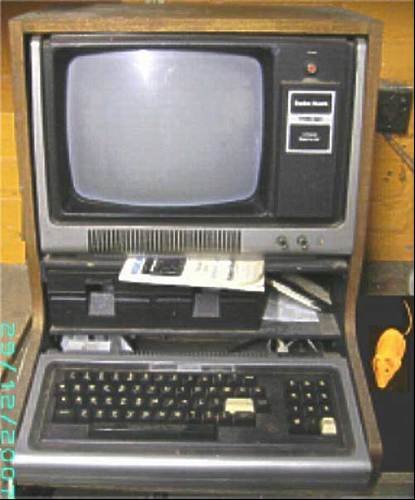 David says: "This is a late 1976 TRS 80 with 64K of memory. About 32K was in Rom, which was used for BASIC language programming. New, it cost about £760, I fitted an expansion interface with 2 floppy disk drives. I hard wired all of the connections because they were so unreliable, but that made it difficult to move so I built a custom case for it so that I could lug it around to my friends' houses without the hassle of assembling it all. I obtained the first copy of Visicalc in UK from the US on 5.25in floppy disks. It was a marvelous program which we used greatly, it cost about £60 and was worth every penny. Incidentally, the spreadsheets used nowadays are all based on Visicalc, which for some reason they didn't protect. The computer was in constant use until about 1986 when we bought an Amstrad PC1512, the files were gradually transferred to this from the TRS80 and it finally retired in about 1990. It still works, but is a little choosy about when it boots up. I hang onto it because, like a