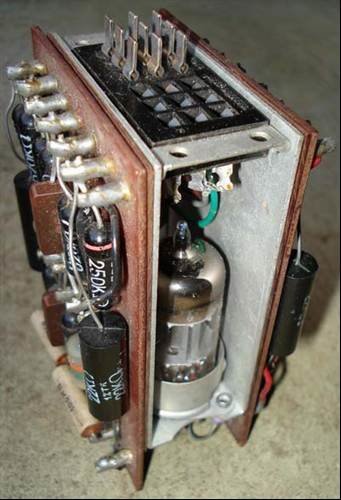 Don Adams sent in this and other photos of his BTM/ICT 542/550 Turret, from around 1960. Don says, "This is the basic logic module of the ICT 542/550 Calculator, a plugboard programmed computer which punched the result of its calculations into another field of the card from which it had read the data. Speed of operation was about 100 cards per minute. The turret surely has to be the ancestor of the PCB. "Each type 12AU7 double triode valve stores one bit. A variety of turrets built to this similar physical design served all the electronic processes required, and the 550 machine contained 600 turrets. The turrets plugged into a backplane mounted on a hinged 'gate' with 100 per gate!" Don goes on to comment further: "Note the (to current eyes) crudity of these hand wired units. In particular the size of the two 'miniature' metal oxide disc 'computer diodes' seems so huge compared with the equivalents of 40 years later!"