The 2012 Intel Developer Forum was a whirlwind event covering all aspects of computing and communications – from advances in high-performance computing and massive cloud services to eking out ever more battery life from smaller and more capable notebooks, tablets and smartphones.

One of the things that struck me at the event was that Intel has an intense focus on wireless – and not just enhancing wireless networking and communications, although it had some stunning innovations to announce here.

Intel has also turned its attention to removing the need for physical bricks to power devices and for cables to enable devices to talk to each other.

Freeing computers from a web of cables

Admittedly, wireless charging is not new. But the focus Intel is putting on it, as PCs, tablets and phones shed weight and size, gives it a much-needed impetus towards becoming accepted and mainstream.

Intel feels that the current crop of wireless charging solutions, where devices have to literally sit on a power pad to charge, is not the answer – you may as well dock a device or plug it into a charger.

So it is looking for ways to charge devices with a lot more freedom, with ranges of multiple feet from the charging station, allowing devices to charge in cases or pockets, and to be actively used throughout rooms with charging stations.

Intel also demonstrated high-bandwidth, short-range radio technology in the 60GHz range based on WiGig specifications. This is designed to allow multi-gigabit data transfers within the confines of a desk or perhaps a room. This compares to the 2.4GHz and 130Mbps of mainstream Wi-Fi today, but which can cover a whole house, or at least a few rooms.

From large and bulky proof of concepts a few years ago, these are now much more mature and close to production ready – the demo was accomplished with the latest generation of ultrabooks without adding additional bulk. Current concepts use a base station to connect to a range of peripherals, but it is easy to imagine that many devices may come with these integrated in future allowing direct connections to devices such as smartphones, cameras or portable hard disk drives without the need for USB or Thunderbolt cables.

With wireless power, it could finally herald a wire-free desk, allowing other clutter free reign instead. My favourite benefit would be not having to keep packing the range of different chargers and cables when heading out for a day on the road or a week at an event – can Intel persuade airports, trains and planes to roll out the supporting infrastructure, particularly for charging? 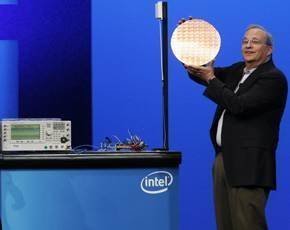 Coming back to connectivity, Intel promised a decade ago that radios would come for free with Intel chips, but this has not really happened. Analogue radio on silicon was okay a decade ago, but as digital circuit sizes have shrunk, analogue radio has not followed, adding cost and complexity.

After a decade of hard work and lots of complex maths and number crunching, it has finally managed to design an almost totally digital radio. Not only that, but it also works with standard CPU manufacturing techniques – Intel showed the digital radio integrated into a complete software-on-chip (SoC) central processing unit (CPU) alongside two Atom cores, and then showed a system streaming video over a few metres' distance.

This heralds new possibilities for software-defined radio, allowing upgrades to new standards as they become available, while making them cheaper and more ubiquitous.

Improvements on connectivity are not limited to client devices either. Intel showed off what it calls the C-RAN, or Cloud Radio Access Network, for cellular and wide area networking such as 3G or LTE.

The solution trims down the base stations, leaving only essential radio equipment in place. The intelligence and processing are moved into a centralised datacentre, with the radio stack being implemented on x86 cores. This allows upgrades to be rolled out to the network by utilising existing base stations and changing the processing algorithms in the datacentre.

While many of these advances are still some way from being ready for primetime, the advances that have been demonstrated are significant and indicate that we are on track to be able to move to a much more open and adaptable mobile future.