There are some things in life that you just have to get on with, and in IT one of those is the management and administration of software licences, writes Tony Lock, programme director at Freeform Dynamics.

Anyone with any experience in a role responsible for the administration of software licences will be well aware of just how complicated things can get.

Yet managing licences well can provide great benefits to the organisation, and that is before we even consider the potential role of "cloud" services in optimising the way in which we pay for the software we use.

So why is it that the commercial and legal aspects of software are frequently swept under the carpet or looked at closely only in exceptional circumstances?

Honing in on the benefits, IT asset management in general, and software licence management in particular, hold the potential to make significant cost savings and optimise staff utilisation and performance, while reducing the risks associated with non-compliance to a growing list of legislative responsibilities, as well as software licence terms and conditions. With this in mind, it is surprising that few organisations realise the potential savings they can make by effectively monitoring and managing software licence usage.

In the data management arena, there are now options to licence some tools based on the amount of disc space being utilised or to be managed. Licence terms can even vary from one piece of software to another, even when from the same supplier.

In the surveys we run, organisations tell us they employ almost every licence model type under the sun, and this is one of the factors making licence management so complex.

With so many options available, we might assume that organisations have all the suppleness required when it comes to building flexible IT systems that can meet the needs of the business as things change rapidly. In fact, a glance at the figure below shows that this is by no means certain. 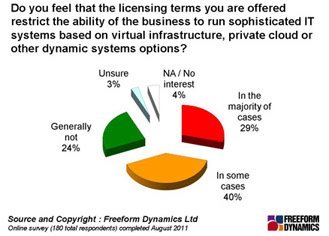 As the figure shows, fewer than a third of companies think that licensing terms available from their software suppliers allow them to run sophisticated IT systems based around virtual systems that can be varied dynamically as needs change over time. Four out of 10 say they can do so only in some cases, while one in four indicate that licensing terms and conditions do not provide them with the flexibility to match that potentially available in much of the underlying IT infrastructure.

Clearly, having a lot of licensing models in place does not help if things get locked down rigidly once contracts have been signed.

With software licensing inside the businesses appearing to limit flexibility, is there room for cloud and SaaS (software as a service) offerings to provide any of the greater flexibility being sought by organisations as they look to match resource usage with business need?

In this respect, the figure below makes interesting reading. As far as the majority of respondents were concerned in a recent survey, SaaS flexibility goes in only one direction, namely up, in terms of commitment to the provider. Only a quarter think there is more elasticity available.

More worryingly for the supplier community as a whole, the fact that one in 10 consider SaaS to have no flexibility at all should be a matter of some concern for an architecture that markets flexibility as one of its greatest strengths. 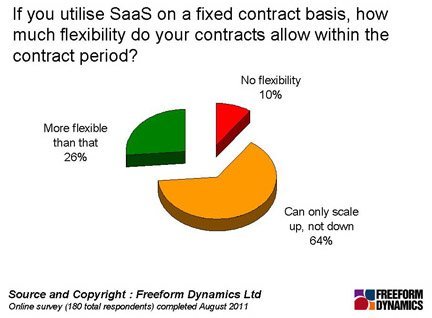 A deeper look into the figures illustrates that the perception of flexibility in SaaS is much more pronounced in organisations with little or no experience of SaaS usage than in those which have deployed such tools. As almost all SaaS solutions are now built on architectures that could allow usage to scale up and down, it is clear that any factors inhibiting users from reducing their usage are purely financial in nature.

Using licensing or subscription terms to prevent organisations from reducing usage when no longer required is likely to prove counterproductive. It appears as though many SaaS suppliers are using licensing terms to prevent, or severely penalise, reduced usage and it is probable that such approaches could inhibit new users from taking on such SaaS services at all, or considerably delay their introduction. SaaS is not yet delivering the flexibility it promises, and this is a significant consideration in an uncertain economy.

It is very clear that managing software licences and SaaS subscriptions is too complex. For suppliers and service providers to help organisations garner the flexibility promised by both private and public cloud, both licence and subscription models need to change.

Rather than seeking to lock organisations in to protect their revenues, suppliers will increase the usage of their offerings more quickly if they deliver real usage flexibility, both up and down, as the potential customer base will have less fear of being locked in or buying too much.

That said, it is also clear that organisations can help themselves greatly by putting in place processes and tools to manage their software licences proactively.

Freeform Dynamics is a research and analysis firm which tracks and reports on the business impact of developments in the IT and communications sectors. It uses an innovative research methodology to gather feedback directly from those involved in IT strategy, planning, procurement and implementation.