Surveys were conducted in February 2011 and again in November. As can be seen in the graph below, 28% of respondents in the first cycle of the research felt that cloud either had no part in their organisation’s future, or that it was just a passing fad.

By the second cycle, this had dropped to 21% - still a sizable number, but those seeing cloud as a game-changer had also grown from 14% to 22%.

There are different types of cloud.

There are two main approaches - public and private clouds, and then there is hybrid cloud.

The first is to use clouds built on equipment that the organisation owns and runs. The second option is to run cloud-based services on dedicated hosted environments (private clouds), using functions provided from systems and software owned and run by a third party for general shared use (public cloud) or a hybrid version of these two cloud models.

The largest proportion of respondents planned to implement private clouds only, with nearly 50% saying they would take a pure private cloud approach, whether on their own equipment in their own datacentre facility, or using co-location facilities (see graph below). 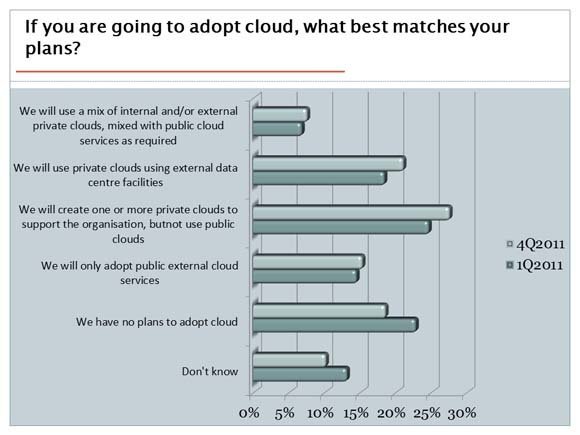 However, this then brings up a range of issues that anyone looking to move to cloud must address.

The further the point where data resides from the point where it has to get to, the longer it takes to get there. Decisions must be made as to what data resides where, whether the business logic is best held with the data and what tools – such as caching, packet shaping and other WAN acceleration technologies – are needed to ensure users get a fully responsive experience.

This leads to the oft-repeated worry of those considering cloud – security. As cloud computing is built on a platform of virtualisation, the actual place where data is stored or is in motion at any one time, is difficult to pin down. Whereas Quocirca has seen this as being a major issue in the past, it does not seem to be so any longer. A more coherent acceptance of the need for security of any data or information asset is becoming apparent; one that ensures the security of data and information, even when it has left what used to be seen as the protected confines of an organisation’s network.

The first question that has to be asked is whether a particular application should be put into the cloud or not. The cloud is not a universal panacea – it is very good for lots of different workloads, but it is not right for all. Reasons for not putting an application into a cloud may range from the technical (the application does not understand a cloud platform); through the financial (the application is licensed on a physical core basis and the vendor is not interested in dealing with virtual cores); to the visceral (the application is perceived as being too mission critical for cloud at this stage).

However, the key is to ensure that any direction chosen now does not stop any of these choices from being changed as time goes on and as cloud and the remaining applications mature. Many suppliers are now providing applications and tools that make this far easier, from VMware with its vMotion; CA with its 3Tera acquisition; Novell with its PlateSpin acquisition; and a number of others. All offer a means to move an application from a physical situation to a virtual one.

However, Quocirca advises that such a move be seen as nothing more than a single step on the road to cloud – existing application approaches should also be reviewed to ensure that the cloud is used to its optimum capabilities.

Cloud computing offers a more flexible and responsive platform for computing. The basic tenet of a cloud environment is that it should be “elastic”, that it can provision and de-provision resources to support workloads as necessary. Large monolithic applications are not very good at managing elasticity – what is required is to break applications down into functional services that can be brought together as required to facilitate a business process. This approach lowers functional redundancy (for example, multiple billing engines in various different applications) and allows cloud-based systems to manage resources at a very granular level, ensuring utilisation levels of resources are maximised.

While looking at tools that will enable existing system to be migrated to a private cloud, it pays to look at the existing systems management software as well. Too many early tools were based on the premise that organisations already had the physical side of things sorted out and managing the virtual side of things could be carried out as a separate task. Unfortunately, cloud computing – even when highly virtualised – depends on the physical equipment underpinning it. It is critical to ensure that systems management tools can manage both physical and logical constructs and understand the contextual linkages between the two. Here, IBM, CA and BMC have been making strong moves to ensure their tools now cross the physical/virtual barrier.

Public cloud should not be overlooked. Although the research states that most organisations are not looking at using the public cloud, it does not make commercial sense to block it off completely. Already, through ensuring that only certain data is sent through to a public cloud, functions such as geo-analysis of customers can be carried out for free using Google Maps/Earth or Bing Maps, just using postcode data. Also other functions are becoming more easily available from free or low-cost cloud sources.

Cloud is already becoming important, and woe betide the organisation that decides to pay no attention to it. However, those who attempt to move to cloud without sufficient planning will also fare badly. A little pre-planning can ensure the move to a private cloud can be carried out with little adverse impact on the business, yet will provide a solid, flexible and more effective platform for the future.