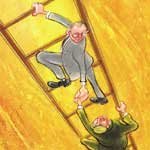 Investing in leadership development has all-round benefits. Those who undergo it become better leaders, so their staff are better led and the organisation as a whole reaps the harvest.

Leadership, says Alan Boulton, senior consultant for the Work Foundation's Campaign for Leadership, "is about getting the engagement of people, getting individual staff to commit to the goals of the organisation and to take ownership of them".

When they do, "they want to contribute more. If they engage, then their performance will improve, and if employees are giving 110% that impacts on the bottom line," says Boulton.

In the best-led organisations, staff "own" the company. Its profits become "their" profits which they will want to maximise.

Conversely, when there is poor leadership, internal friction will result, which slows down the organisation and diverts it from progress. It also makes for a workplace where job satisfaction is as poor as motivation - and as destructive of profitability.

"Nine out of ten problems that employees encounter at work are people-related," warns Boulton.

Where and how should investment in leadership development best be made?

"Direction needs to come from the top," says Boulton. "Although there are those to whom leadership comes naturally, we believe there is an element of leadership in everyone, and it depends on circumstances and environment."

Moreover, although leadership development is usually targeted at senior managers, middle managers and below benefit as well. It can be appropriate, he argues, for everyone in a position of influence. "For example, first line supervisors have the most influence on the operations of an organisation."

Good leadership, if it is to be effective, has to permeate all levels. "There needs to be a culture of good leadership," says Boulton.

Whatever the level, "the principles of leadership are the same," he says. "I don't believe leadership can be taught, but it can be experienced. We can develop leadership skills by showing what good leadership feels and sounds like."

Often, he acknowledges, those being developed as leaders know only too well what it is to be badly led. "They come with a lot of baggage, both positive and negative, depending on the behaviours they've seen," says Boulton.

And since, apart from the role of chief executive, every manager, however senior, will have their own manager to report to, it's essential, believes Boulton, for leadership development to include upward leadership.

All too often, bad leadership comes from a philosophy of command and control.

"Sometimes that approach is essential, and a committee meeting is inappropriate," says Boulton. "But it won't work when you're dealing with very professional people - you need leadership through coaching and facilitation, through knowledge sharing. You don't give orders, you give directions."

To be a good leader, believes Boulton, you need to apply three key principles.