Changes can wreak havoc in a datacentre that will outlive generations of servers. How can green facilities stay efficient in the face of IT progress?

Servers are refreshed frequently. Datacentres, on the other hand, take two years to design.

So, by the time it becomes a live production facility, it is highly likely that an entirely new generation of servers will be installed in the datacentre from what was originally available when the project was conceived.

The Green Grid is one of the main organisations driving forward datacentre energy efficiency. Michalis Grigoratos chairs the Green Grid’s Europe technical working group and is business development principal for critical facilities at HP. He says: “The datacentre will need to last 15 years, so we have to design something robust enough to cater for technology changes throughout its life.”

How to keep the datacentre cool

• Some server rooms use thick plastic butchers’ curtains to keep the air contained.

• Plug blanking plates on a server rack to minimise the amount of cold air that mixes with the hot, exhaust air at the back of the rack.

• If it is not possible to replace chillers with free-air systems, consider looking at Turbo Cores to generate water more efficiently or hybrid coolers, if space permits, to drastically reduce cooling.

• Self-scaling UPS are modular and can run modules automatically, based on the power load of the server.

He says that 10 years ago not many people knew what a datacentre was: “Now people want to know about its energy efficiency.”

Today, the challenge for businesses is that there are many datacentres that were not designed to run efficiently. “The nature of a datacentre is that you cannot experiment or change very fast. It’s a very traditional environment,“ says Grigoratos.

Commercial real estate firm PMB Holdings sees an opportunity in the datacentre market, due to the inefficiencies of older sites. “Over the next few years, older datacentres will not be acceptable anymore,” says the firm’s CEO , Edward Johns.

Even before considering the greenest IT for a new datacentre construction, the environmental impact is one of the issues that planners will look at early on in the project.

Andrew Good is a director at TFFP Architects, a company working for PMB Holdings, on a new datacentre in Milton Keynes. Speaking from his experience of working with local authority planners, he says: “In certain locations they like low car use and they like you to make a contribution to wildlife, which means making the site a bit greener by planting more trees.” 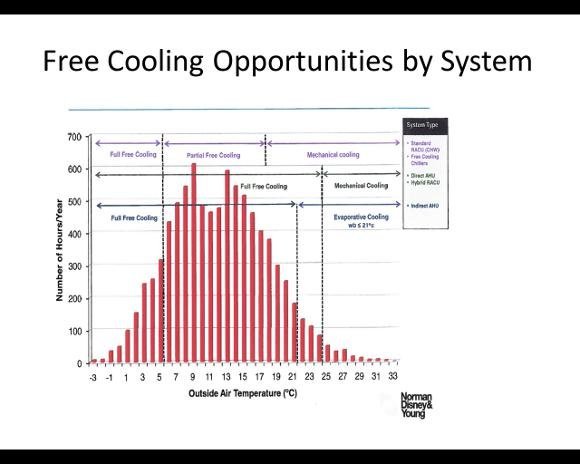 However, tackling energy efficiency in a datacentre’s operations is the main way to limit its carbon footprint and the cooling system is the biggest culprit in terms of inefficiency. Brian Waddell is a director at Norman Disney and Young, a firm of mechanical and electrical consultants. The company won an award for its work on the HP Wynard datacentre, that uses ambient cooling as a key component to reduce carbon emissions.

Adiabatic cooling is the next step, beyond indirect air cooling. As the Green Grid’s Grigoratus points out: “You cannot cool a 15kW or more server rack using just ambient cooling, you will need water cooling. But water cooling is not energy efficient. This is where adiabatic systems come into play. Effectively, they enable free cooling within a datacentre to support higher server densities.

Contemporary state-of-the-art datacentre designs are able to achieve a power usage effectiveness (PUE) figure of 1.2 – this is what Microsoft and Google strive for in their public cloud facilities. Free air cooling, whether it is direct or indirect, will be unable to improve efficiency to this level.

Businesses can apply a number of technologies to improve energy efficiency to the magical PUE of 1.2. In Milton Keynes, Waddell has chosen highly-efficient uninterruptible power supplies (UPS) to condition power supplied to the IT equipment. These are self-scaling, which means they automatically adjust the amount of power they use, by scaling UPS modules up and down based on the IT equipment’s power usage. Automatic lighting can also help improve efficiency by only switching on lighting where an operator is working. Corridor lighting switches on and off as and when someone moves to a different part of the facility. PhotoVoltaic cells may also contribute to a greener datacentre, but they are not going to have much of an impact unless the site is located in a sunny climate like the south of France. Waddell says they are limited in terms of PUE impact because they only produce a finite number of watts per square metre. “They are very expensive for a relatively small impact,” he says. “It is much easier to design energy efficient cooling for a datacentre.”

Large datacentre sites can also use renewable energy sources as a means to lower their carbon footprint, such as hydroelectric generators or wind farms.

Blessed with an average temperature colder than temperate climates, and plenty of free energy due to geothermal activity, Iceland is an attractive location for datacentre facilities. Verne Global operates a datacentre facility in Iceland which uses modular datacentre building blocks from Colt Technology. It has redundant connections across North America and Europe and uses 100% renewable energy with two sources of power: hydro-electric and geothermal. Average winter temperature is around 0˚C, while the summer average in Reykjavik is 10.6˚C. According to Rhonda Ascierto, an analyst at Ovum, Iceland’s renewable energy sources are largely untapped. In a post on the Verne Global datacentre she wrote: “Estimates vary, but it is thought that only 20-25% of the hydrothermal and geothermal sources potentially available for electricity production are currently utilised.”

She noted that the Icelandic government has changed taxes to make it cost-effective for IT firms to ship servers there.

He believes green IT should not come at a premium. “We can go for long-term solution and offer customers 20% price protection,” he says. According to Cantrell, Verne Global is able to show customers what their power bill will be like in 2030.

BMW is one of the organisations using the Verne Global Icelandic facility. The company saved 80% on its energy costs by moving a high-performance computing facility to Iceland. Once the building is green in terms of PUE, where else can a business go to lower the carbon footprint of its datacentre? “The next step is the IT side. People are starting to ask questions about how many of the 25,000 or so servers they run in their datacentres are actually doing work,” says Grigoratos. This is about server utilisation.

Server consolidation and virtualisation will increase utilisation, making a datacentre more efficient in terms of the number CPU cycles it has on tap. But higher server utilisation increases the energy workload.

“Take a hypothetical datacentre with an average PUE of 1.5. If IT decides it is time to do a technology refresh on some servers and brings in the current generation as replacements, the overall performance and productivity of applications will increase, but because of the energy efficiency improvements suppliers have made, the overall power draw for IT could very easily go down.”

With technological improvements to server compute platforms, users can run more sophisticated applications such as complex data analytics, which will shift the focus on efficiency over to storage, which is likely to keep growing.

For the ultimate level of server utilisation and to offload the environmental impact of massive storage arrays to feed data for big data analytics, businesses may need to consider moving to public cloud infrastructure as a service. Grigoratos added: “It doesn’t make sense to run your own primary datacentre from a technology efficiency point of view.”