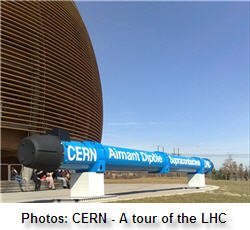 CERN, the European Organization for Nuclear Research, is a particle physics laboratory based in Geneva, Switzerland.

Currently CERN is using the large hadron collider (LHC) to monitor collisions between particles, and gather and analyse the data to learn about the nature of matter. This information will be used to determine the origins of the universe.

From an IT perspective, CERN's major challenge has been to put in place the technology to collect, store and analyse the data, and share it with the world.

A huge innovator and user of technology, the lab was designed primarily to provide the particle accelerators and infrastructure needed for high-energy physics research.

In total, CERN operates a network of six particle accelerators and a decelerator.

CERN is funded by 20 European member states, and is currently the workplace of 2600 full-time employees, as well as around 8,000 scientists and engineers.

Founded in 1954, CERN has a distinguished scientific pedigree. It has been home to three Nobel laureates, and it is the place where computer scientist Tim Berners-Lee invented the World Wide Web in 1989.

Scientific achievements at CERN have been profound for the scientific community. They include: the discovery of neutral currents in the Gargamelle bubble chamber, in 1973; the 1983 discovery of W and Z bosons; and the determination of the number of neutrino families, in 1989.

Build your own custom video playlist at embedr.com