Rather than focusing exclusively on monitoring and managing individual components, the idea is that you spend at least as much time and effort on ensuring that everything works together to provide something valuable and appropriate to the user. By "everything", we mean all relevant parts of the IT and communications chain, including both internal and external components and resources. 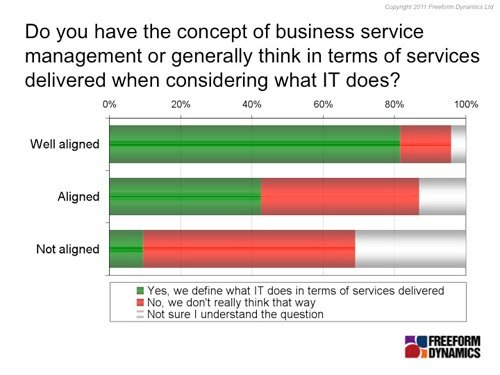 There is direct correlation between the adoption of a service-centric approach to IT delivery and the degree to which IT activities are seen to be aligned with business priorities.

As an example, a traditional IT operations approach might include looking after the resilience and uptime of an "e-mail system", and separately managing the uptime and performance of the network. Those taking a service-centric view, however, would be considering the availability and performance of the e-mail service, as experienced by users at the point of consumption. In our simple example, this obviously needs to take both the e-mail system and the network into account, as the service is dependent on both working acceptably.

It is at this point that some IT people start to get a bit defensive.

The objection we often hear is that it is just too onerous to deviate from the component or system-based view. The performance of our e-mail service in reality, for example, is actually dependent on a lot of things if you really pull it apart - the PC on the desk or mobile in the hand, the e-mail client software being used, the network (or networks) that transport messages back and forth, the e-mail server environment itself, and the storage devices underpinning it. Pick any other application or "service" and it is likely to be equally, if not more, complicated in terms of underlying components and dependencies.

The fear is that it is a short step from adopting an end-to-end services approach and business people starting to judge IT simply on what happens at their screen and keyboard, without taking into account how complicated things are behind the scenes. IT then gets lumbered with a whole bunch of service level commitments and/or expectations that, it is perceived, are a lot harder to manage. It will no any longer be possible to make the case that you were mostly doing your job well because 99.9% of the infrastructure was working fine, and that major outage was caused by a single component failure that was beyond your control.

But let's be honest, users have never really bought into that kind of defence when things have not worked as they should. They have always been pretty much exclusively concerned with what they are able to do (or not do) at the end point of the IT delivery chain. If you ask any user or stakeholder how well they think IT is performing or supporting their area of the business, the language they use is inherently service-centric.

When they talk about e-mail, they focus on the number of times it has been down recently or has been running really slowly. Even if it has been explained to them that the issues have been caused by a comms provider not meeting its obligations, they are not really that interested. They just want you, i.e. the IT department, to make the problem go away.

And it works the other way around too. Business people might well acknowledge how well the call centre system has been running recently, but do they care when you tell them about that major switch failure and the heroic and creative efforts of the network team to re-route traffic and avoid a major outage? The chances are, they will probably just shrug, on the basis that it is your job to keep things running properly, so what's the big deal?

Take control with a service-based approach

Adopting a more explicit service-centric approach to IT delivery means you accept these things, and once you do this, you can start to take control. You realise that there is no point in trying to define how well IT is doing in terms of how many green lights are lit within the infrastructure. However good the internal IT view looks, you will still ultimately be judged on the basis of what is delivered to users. If you define and manage expectations and commitments based on this, life becomes easier, not harder, as you avoid all of the problems that stem from users defining what is "acceptable" unilaterally, and often in a very subjective manner.

The bottom line is that IT from a business user perspective is all about service consumption whether anyone defines it formally or explicitly in this way or not, so thinking in terms of service delivery within the IT department should really be a no-brainer.

Freeform Dynamics is a UK-based industry analyst and research organisation that investigates and reports on the business impact of developments in the IT and communications (ITC) markets across Europe and the US.