As speculation about the demise or resurrection of BlackBerry continues, many are arguing that the success of the recently released Z10 and Q10 devices will provide an indicator of the company’s future.

Against this background, I am going to share some personal views of the latest BlackBerrys based on using them in a work context.

First, let me say that I have been a long time BlackBerry user; indeed I have a drawer full of old BB’s spanning about six generations.

I have tried various alternatives, including iPhones and Android devices, but until about 12 months ago I had always gone back to a BlackBerry as my primary work device because they enabled me to handle all of my core communications stuff much more quickly and efficiently.

It was the arrival of the Samsung Galaxy S3 that broke the pattern. I found it to be such a powerful, customisable and easy-to-use piece of kit that I stuck with it as my main handset for business use.

Having said that, I never really ditched the BlackBerry Bold 9900, because even though the S3 – with the third-party SwiftKey keyboard installed – was okay for data entry, it was still no match for a physical keyboard. I therefore carried the 9900 as a companion device for intense periods of rapid-fire email and social media activity while out and about.

When the Z10 was released, I was interested in how good a job BlackBerry had done with the new operating system (OS). With the claims of this touch-only device sporting the best soft-keyboard on the market, I was also curious to see whether it would provide something approaching that classic BB typing experience.

I spent two weeks working with the Z10 as my main device. It took a bit of getting used to, mainly because the user interface (UI) works differently to most other smartphones. I won’t go into detail on the specific functionality here, because so many in-depth reviews have described all that in great detail.

Suffice it to say that once I got used to the Hub – which is basically a unified inbox into which various applications are tightly integrated – and the swipe-centric approach to navigation, I found the device extremely easy and efficient to use.

To my eyes, the screen was sharper than the S3, and the sound quality through the speaker and headset was far superior – sound was always my biggest complaint with the S3.

All the basics were there in terms of the apps I use for business, and hooking up to my Office 365 account over ActiveSync worked exactly as you would expect.

Disappointingly, however, I didn’t find the Z10 keyboard easier to use than SwiftKey on the S3. In fact, unlike the S3, I could not find a way of enabling haptic feedback (where a short vibration is produced each time you hit a key), which is something I like to have switched on. My typing accuracy suffered a bit as a result, and the clever word suggestion/correction didn’t make up for that.

One of the things that surprised me while trialling the Z10 was how much I had previously taken the larger S3 screen for granted. With my 50-something eyes, it was the difference between being able to read some websites comfortably and either squinting or having to don my specs.

The other thing I missed was the range of leisure apps you get with Android. BlackBerry has done a respectable job of making sure most of the obvious productivity stuff is available, but the apps side of things is still a work in progress for the BlackBerry developer community.

The last thing I’ll mention is battery life, which is respectable on the Z10, but unlike the S3, you are on the edge after a day of heavy use. 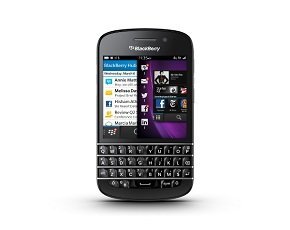 So what about the Q10, the sibling of the Z10 which runs the latest BlackBerry OS and has a physical qwerty keyboard? Well, I picked up one of these a few days ago – and I absolutely love it.

At first it felt a bit weird, compared with the Bold 9900, because it doesn’t have a trackpad or the physical call, hang-up, menu and back buttons, but you soon get used to the soft-keys. I was already comfortable with the gestures for more general navigation (which is the same as on the Z10), but I guess there would be a learning curve there too for most new users (though worth it once you get there).

The physical keyboard feels marginally better than the 9900, perhaps because it is a straight-line rather than curved layout, but the difference is not huge.

The sound quality is superb – I would say even better than the Z10, though I haven’t done an objective comparison – and there are few more apps available because the Q10 runs version 10.1 of the operating system, which at the time of writing, is not yet available for the Z10.

The battery life also seems more comparable to the S3, though I need to use the device for another week or two to get a real feel for that.

The big compromise is obviously on the size of the screen, which is about half the size of Z10 with a 1:1 aspect ratio. For messaging and social media, this does not matter at all, and with the physical keyboard this is where the Q10 really comes into its own. Whether it’s email, text, Skype, Twitter, Facebook or LinkedIn, I have found the experience hugely liberating compared with any pure touch device.

Having EverNote embedded natively into the device, through the Reminders app, is also really useful if you are into that service.

The Q10 is a lot more limited for media consumption and web browsing though. While I would quite happily sit on the train watching videos on an S3 or Z10, I cannot see myself doing this with the Q10.

The browsing side of things is manageable for me, however, as most of my web use is concerned with news sites. The saviour here is the Reader mode, which extracts the main text pane from the page you are on and renders it properly word-wrapped in the font-size of your choice. It’s a couple more taps than on the S3, but that’s not a big deal.

I would sum up the Q10 as a being the best work communication and social media smartphone I have ever used, because it combines a modern UI with a superb physical keyboard.

Beyond music, though, even once the app catalogue has been built out, the Q10 is always going to be a compromise on other stuff simply because of the limited screen real estate.

And, of course, it’s a pointless option if you either don’t do much typing or are particularly fast and accurate on a soft keyboard – you’d be better off getting a device with a bigger screen.