This article can also be found in the Premium Editorial Download: Computer Weekly: The IT challenges facing an independent Scotland
By

Much has been written about the rise of user influence and power. Some of it might exaggerate the degree to which phenomena such as bring your own device (BYOD) and shadow IT now define the state of play, but there is no denying the trends.

Research consistently confirms that more demanding and less tolerant employees are increasingly challenging the IT status quo and, in some cases, are bypassing or attempting to circumvent IT policies and processes.

Most organisations are seeing at least some of this behaviour, particularly in parts of the business that have more political power.

Some commentators interpret the trends as an indicator of IT departments failing to understand how needs are evolving in the business.

The assertion is that CIOs and their teams are stuck in their old "command and control" ways of thinking and are unwilling or unable to adjust to the new world of cloud and mobile.

Meanwhile, tech-savvy employees, educated through the use of technology and services in their personal lives, don’t suffer from the same baggage, which today puts them in a better position than IT to decide what’s optimal for the business.

It is even argued that IT teams will become redundant over time, or may be relegated to just looking after the "plumbing", as users drive the things that really matter in collaboration with external providers which offer more flexibility.

It’s a compelling narrative, and a great one to propagate if you are into sensationalist mischief-making. But, like most things in IT and business, the reality is a little more complicated.

In truth, unilateral user activity is not always a function of business need. Sure, when employees start using a personal device or consumer cloud service for business purposes, they may be highlighting a capability gap that needs to be addressed.

But such BYO adoption of technologies could equally be down to users simply acting on a personal preference or interest, following fashion or attempting to demonstrate their status or individuality.

Even if BYO activity reflects a genuine business requirement, users are generally not able to look beyond their own immediate needs and wants. With a frequently parochial perspective, bigger-picture considerations such as security, compliance, data protection, future-proofing, interoperability, maintenance and support often don’t figure very highly in their thinking, if at all.

And in opting to use something different to their colleagues, they may create more productivity problems than they solve due to limitations and incompatibilities that need to be worked around by everyone else, as well as themselves.

So users gaining more of a voice and assuming more power is a mixed blessing, if such developments are allowed to take place in a free-wheeling manner. Handled appropriately, however, with the right level of input, guidance and control from IT, the business can potentially benefit more quickly from new ideas and ways of working.

The triangle of interests

When working through the practicalities, one trick to keep in mind is the "triangle of interests" (see figure below). 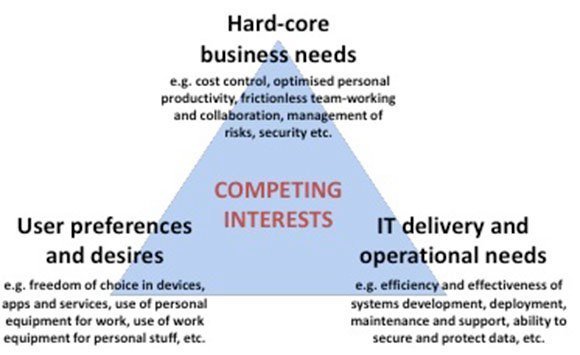 For progress to be made and harmony gained or maintained, it is critical that both IT and business stakeholders work together through the different sets of interests when considering a new idea, requirement or problem to be dealt with. Of course, when conflicts arise, it’s the hard-core business interests that must be prioritised over the other two.

Putting this into practice by updating your IT governance processes to deal with an increased level of user input is easier said than done, but it’s critical if the business is going to get the best from technology in an increasingly digital world, and various proven approaches exist that can adopted.