Desktop virtualisation is a collective term used to refer to a family of related technologies and techniques for centralising the management and/or execution of various elements of the traditional (typically Wintel) desktop. When the right mix of options is implemented in the right way, operational overheads can be reduced, security tightened and user flexibility enhanced.

I won’t go into detail here, but the key to understanding what’s going on in this sector is to appreciate that virtualisation can be applied separately to different desktop elements.

At the operating system (OS) level, for example, we have the "session-based" approach (also known as terminal services) and a couple of different forms of Virtual Desktop Infrastructure (VDI). We can then virtualise local data storage (such as the Documents directory) and user settings (preferences) using redirection techniques.

If you are interested in a structured walk-through of the options and the scenarios in which they are and aren’t appropriate, there are a couple of really good eBook primers on our website you might want to take a look at:

The first of these also covers the area of Application Virtualisation, which is based on techniques for running applications in containers rather than natively.

The idea is to minimise dependencies on the host OS but also to prevent conflicts with other applications the user might be running at the same time. This has advantages in terms of deployment efficiency, desktop stability, ease of support, and (potentially) user convenience, which the eBook covers in more detail.

If the application is running directly in the user’s desktop environment the term "application streaming" is typically used.

If it’s running on another machine, but with the appearance of running locally, then the term used is "remote application".

Either way, the user can’t tell the difference between a virtualised application and one installed directly into their desktop – it’s launched in the same way, cut and paste between applications, works as normal, and directories, network shares and other resources can be accessed in the familiar manner. 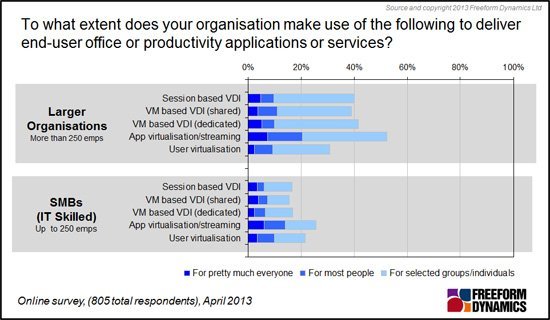 The beauty of application virtualisation is that it can be used in conjunction with both traditional physical desktops and virtual session-based or VDI environments.

With application streaming, even though management is centralised, the application executes locally, which means it can also be applied to Windows notebooks and tablets that are often used in disconnected mode or on low-speed/high-latency networks.

I have personally been a big fan of application virtualisation since the technology started maturing to become truly enterprise ready two or three years ago.

Until recently, though, our research showed that uptake was significantly behind other desktop virtualisation approaches. I was therefore pleased to see from a study we ran last month that activity is picking up, at least in relation to delivering office and other productivity solutions.

The data we are looking at here was gathered via an online survey of IT pros, so please don’t take the numbers literally.

The absolute level of activity will be exaggerated because of the self-selection effect, and we are only picking up small and medium-sized enterprises (SMEs) that have IT skills in house. What is significant about this picture is that application virtualisation is now the most commonly-used technique in the broader desktop virtualisation arena, which suggests that more people are "getting" the idea that you can virtualise selectively.

Why does this matter? Well, with the high number of aged desktop estates out there, and the prospect of Windows XP being end-of-lifed in the not too distant future, we anticipate a lot of refresh and migration activity over the coming year or two.

So, if you are considering a desktop modernisation exercise in your organisation, it is well worth exploring the alternative desktop delivery options I have mentioned, and remembering that desktop virtualisation does not mean you have to centralise everything.