Over the course of many months there has been considerable coverage of cloud-based office productivity tools and their potential use in modern businesses.

In particular, Google Apps has claimed a lot of column inches as it seeks to be seen to be a challenger to the very well-established Microsoft Office suite. And since the launch of Office 365, Microsoft itself has trumpeted its web-based office capability.

But what do people working in businesses consider the role to be for such tools?

At the heart of the matter is the question of whether such cloud solutions are considered to be a viable alternative to on-site solutions that are now entrenched in most routine business operations.

Recent research carried out by Freeform Dynamics suggested that few organisations are ready to adopt a cloud-only approach to office productivity. More specifically, the majority of respondents indicate that web-based office solutions are best thought of as complementary to, rather than a direct replacement for, desktop tools.

The importance of office tools in the running of daily business operations is something that’s very easy to overlook. These tools are so widely utilised that they have become almost invisible, except when they do not work or are unavailable.

The impact of cloud on IT

Trust and security in the cloud

But a quick check of the functionality we are discussing – e-mail, word processing, spreadsheets, presentations, document collaboration, calendar sharing – illustrates how deeply these solutions are now used in wide swathes of routine operations. In many respects, these tools are often the glue that holds many business processes together, and are today being augmented with newer functionality such as IP telephony, audio/web/videoconferencing, and instant messaging.

Our research highlights the importance of office solutions while simultaneously throwing light on how well the predominantly desktop resident tools already in place are accepted. 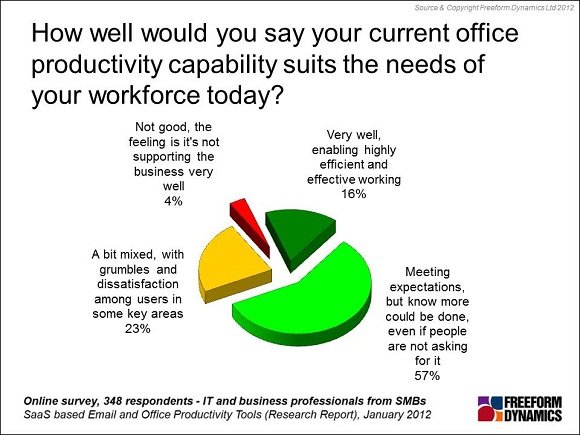 Figure 1, for example, shows that though some respondents report a measure of dissatisfaction with current offerings, the majority indicate that existing solutions are largely effective, even if there is recognition that more potential could be realised.

So if many organisations do not see major problems with the current office productivity solutions, why would they consider looking at software-as-a-service (SaaS) and cloud offerings at all? Clearly the attraction of making cost savings generates considerable interest, but other factors, such as allowing staff to do new things or work more easily and improving levels of service and reliability, are also recognised as potential benefits deliverable using SaaS office solutions.

While such potential benefits are recognised, however, there is also an acknowledgement that migration-related challenges exist. These are perceived to be similar in magnitude to those you would expect when switching to an alternative on-premise suite, with the potential barriers of integration with other business systems high on the list.

Of course SaaS doesn’t always mean browser based tools, and conversely, browser-based access is not unique to SaaS. Hosted e-mail services are often accessed via a local e-mail client, for example, and modern on-premise e-mail servers can be accessed remotely via a web interface. But it has become popular in some circles to speculate that pure web-based tools, running only in a browser against a SaaS back-end, will replace desktop tools, including word processing, spreadsheet and presentation software.

Web apps not a replacement for desktop tools 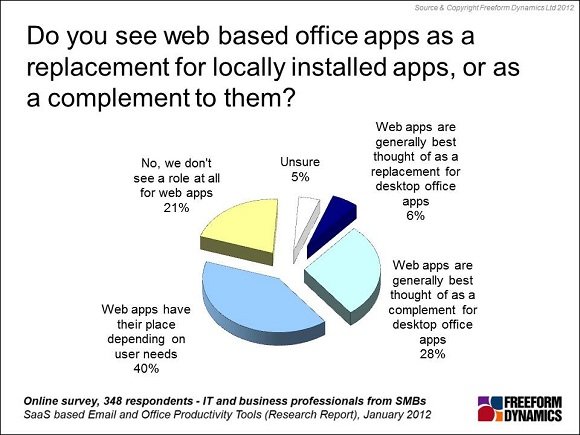 As can be seen in Figure 2, however, only a very small percentage of organisations believe that web applications can be thought of as direct replacement for desktop office tools; indeed, three times as many see no role for such solutions at all.

Given that an online survey such as this is likely to disproportionally attract those with an interest in SaaS, even these low numbers may well be overstating the readiness of the market as whole to adopt web-only office solutions.

To net this all out, it is clear is that a significant proportion of organisations recognise that web-based office applications may well have some role to play in their businesses, but not as a replacement for desktop productivity tools. Rather they are seen as being complementary, capable of adding flexibility to the way people work. 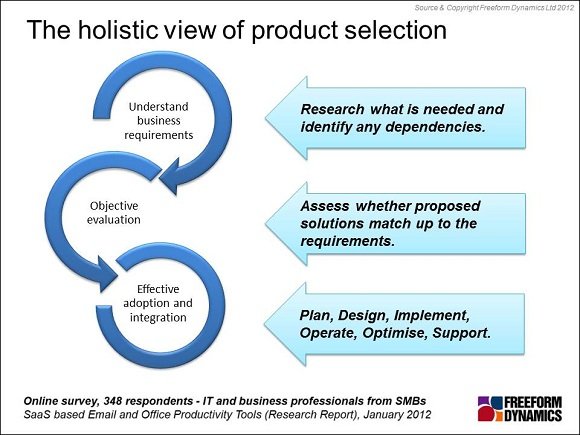 The research we have been discussing highlights that switching to hosted office productivity solutions is not a case of "subscribe and go". A disciplined approach to evaluation and implementation is needed, as summarised in Figure 3.

So, in summary, the awareness that SaaS office tools exist is widespread and organisations can see them playing a role going forwards if they can overcome integration, migration and data governance challenges. But, as ever, the new solutions need to be assessed in the light of the needs of the business as a whole – its operational requirements, governance/legislative restrictions, and the readiness of organisations to manage change.