Charles Teague joined Allaire Corporation in 1995. Allaire was the creator of ColdFusion, one of the first database-driven web content servers. He had a front-row seat for the explosion of web content and web commerce that followed. Through what became more than a decade of change, Allaire founded another technology start-up, worked for Microsoft, and even played the role of venture capitalist.

But it wasn’t until Teague's next step that he earned the title of "digital disruptor" – he and some friends developed an app and gave it away on a digital platform for free.

His iPhone app – Lose It! – shot to the top of the iPhone "health & fitness" category. This tidy little app has, since late 2008, offered people a much-needed benefit: weight loss. It is simple – users log the calories they consume and see how that affects their long-term weight.

Teague realised early on that the iPhone was the ideal calorie-tracking platform. Users always have it with them, its apps are a few finger motions away, and it gives customers remote access to nutrition and personal history databases stored in the cloud. Today, Lose It! has more than 13 million customers accessing the tool on a variety of platforms, such as iPhones, iPads, Android phones, tablets and on the web.

A platform is only as powerful as the digital bridge it builds to the customer.

It used to be that large retail stores bragged of having 20 million customers, a powerful analog relationship. But those customers only came to the store two or three times a year.

An obsession with digital relationships, a passion for measuring results, and a fondness for rapid innovation cycles in which failure is viewed as cheap feedback are traits that make Charles Teague and his team digital disruptors

In a digital era, companies such as Gilt Groupe can get millions of customers to visit the site or use an app two or three times a day. This creates a perpetual customer relationship, one that digital disruptors see as the most desirable thing in the world – they organise their entire business to tap those platforms most likely to generate the most minutes of engagement per day from the most people.

This platform-based approach to customer engagement creates an entirely new level of measurement. Thanks to tools built into the digital platform that Teague exploits to reach his millions of customers, he has real-time insight into what his customers do and what they want. That insight allows him, and other digital disruptors, to innovate continually, identifying specific improvements they want to offer customers to see how they will respond, knowing that not everything will work.

Yes, digital disruptors will fail – usually more often than they will succeed – but because they exploit digital plat­forms that require almost no investment and provide such immediate feedback, failure becomes a cheap teacher.

An obsession with digital relationships, a passion for measuring results, and a fondness for rapid innovation cycles in which failure is viewed as cheap feedback – these are traits that make Charles Teague and his team digital disruptors.

You can do this, too, thanks to this new digital structure, the digital platform. For decades, the prevailing wisdom has been that a company had to grow in size to achieve economies of scale. But today many of the economies of scale that matter most don’t have to reside in the company for the company to benefit from them. They can instead be attributes of a digital platform that a company exploits. In the case of FitNow, the plat­forms the company depends on –and exploits to scale – include Apple iOS, Google Android, and the web.

Digital platforms are fundamental to success

These platforms are fundamental to the success of all digital disruptors. But disruptors exploit platforms, they don’t have to create them. Conversely, the platform creators – companies such as Apple, Google and Microsoft – succeed by enabling disruption, but they are not necessarily disruptors themselves. Instead, their goal is to open their platforms to any company eager to build a measurable, innovation-enabling digital relationship with a customer.

Let’s look at a very physical example. Consider Vestas, a Danish company vying to become a leader in the wind turbine business. Having won contracts to deploy hundreds of turbines in wind farms in countries including Belgium, the UK and Sweden, Vestas is supporting countries interested in renewable sources of energy.

These turbines are loaded with digital sensors that can track any kind of stress to ensure the blades are turning safely. This investment in sensors creates the ideal conditions for collecting, processing and communicating that data back to the operators, which are most concerned with the turbine’s success. But if Vestas and its customers are smart, they will use those sensors to create measurable digital relation­ships with people outside of the control room. 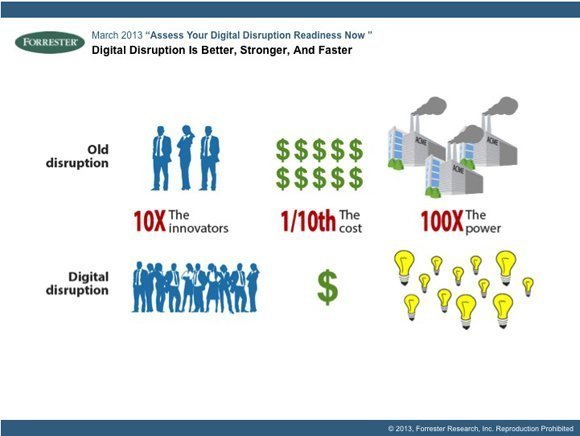 Imagine that a week’s worth of sensor readings shows that the turbine is performing at lower cost or greater efficiency than planned. A smart turbine operator would be happy to share this information with citizens, activists and politicians.

A mobile app or a Facebook page that community members can “Like” would establish that immediate digital bridge with facility operators. Vestas could pipe certain types of information directly to the app or Facebook page such as the company’s PowerForecast tool, which estimates future power generation based on global weather patterns.

Vestas could encourage local school teachers to teach the children in the community how to check the data, helping aspiring engineers in local high school classes to download and incorporate the data into their schoolwork, analysing the cost of wind power versus other sources.

Suddenly, a heavy industrial firm has a dynamic digital relationship with hundreds of new “customers” it could never touch before.

That’s the power of digital platforms – and by exploiting them, companies of all sizes will find themselves more directly connected to customers, adding a digital component to even the most physical of product experiences.

James McQuivey is the author of Digital Disruption: Unleashing the Next Wave of Innovation. He is a vice-president and principal analyst at Forrester Research and the leading analyst tracking the development of digital disruption.