Serving the evolving technology requirements of the modern business

A number of IT suppliers have gone on the record saying that owning your own infrastructure is a dead-end and everything will move into the public cloud as quickly as we can make it happen.

While this vision may be great at starting what is usually a pretty heated discussion, Freeform Dynamics recently surveyed 481 enterprises to understand what is really happening with cloud adoption and datacentre evolution.

As it turns out, this vision is about as far removed from the reality of running and delivering IT services as it is possible to get for most companies. A minority of around 15% of companies see themselves as running most of their IT in the Public Cloud within the next three years (see Figure 1).

As it turns out, this group is made up mainly of smaller businesses that do not have a large established IT infrastructure in place and are able to grow while using externally provided services. 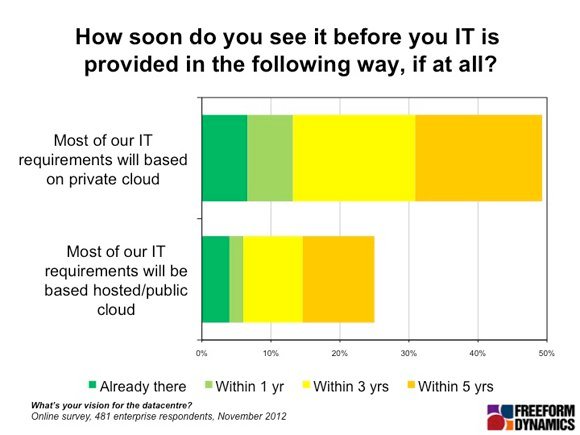 Businesses are focused on transforming their existing datacentres

Most businesses – especially those that have been established for some time – have existing IT infrastructure and operations which cannot just disappear. Very few companies, unless they are banks or service providers, can afford the luxury of starting again with an IT transformation initiative that sweeps away the old to replace it with something brand new.

By far the preferred approach is to build a modern, optimised environment for running new workloads and to gradually move older workloads into the new environment. The end result is that rather than workloads moving externally, most companies are looking to improve their internal environment to become more responsive, dynamic and efficient.

It is no surprise that about a third of respondents see themselves as delivering most of their IT services through a private cloud in three years and around half in five years.

This may be a challenge to achieve for many, given their starting point today is one where applications, servers, storage and networking are typically bought and operated in silos that don’t integrate very well together. Getting funding to implement a shared service infrastructure with joined-up management and automation will be a key priority in 2013.

Public cloud will deliver mainstream IT services over time

The move to private cloud does not meant that the public cloud is not relevant for the mainstream future of IT service delivery. There are many popular business applications available as software as a service (SaaS).

In addition, a growing number of companies already use external IT services, such as infrastructure as a service (IaaS) on a regular basis. Although some make widespread use of these services, most use it on a much smaller scale to augment what they already have in place, or to cope with short term needs (see Figure 2). 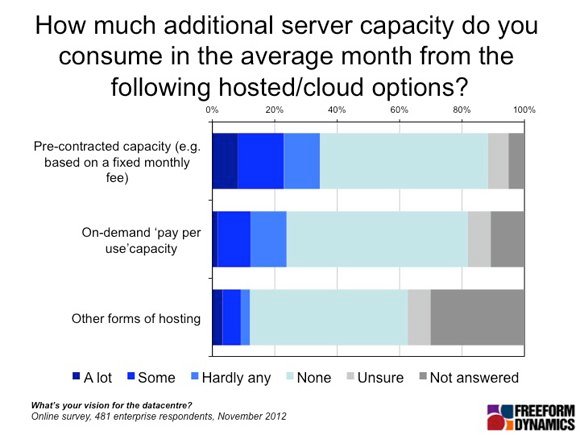 Where the use of public cloud or hosted infrastructure is not that widespread, it may be easier to pay for the capacity used in a flexible or on-demand manner. If the use is informal or for things such as irregular testing and development, this may work well as no forecasting is required.

As usage becomes extensive though, the on-demand model can lead to unpredictability and can require a lot of attention and resources to manage it effectively. This leads many companies that do make use of public cloud or hosted services to put the effort into forecasting their usage and capacity requirements and pay a predictable fixed monthly fee where it makes sense.

The upshot of these trends is that the modern IT department is gradually changing from being a technology provider of individual applications running on dedicated systems. It is becoming more dynamic and there is a changing emphasis to focus on the overall service being delivered to the business rather than the discrete components.

With the service being the main focus, there is a lot more freedom to consider how to source and run what the business needs. In many cases, this will most likely still be the internal IT infrastructure, but in the form of a private cloud.

But knowing the requirements of the service and what it requires to deliver it internally enables an informed decision to be made on whether the service may be better run externally – whether for cost, performance, reliability or some other reason.

The service may be run full time out of the public cloud, or just moved there if circumstances demand it, before being brought back in house in a hybrid cloud approach (see Figure 3 below). 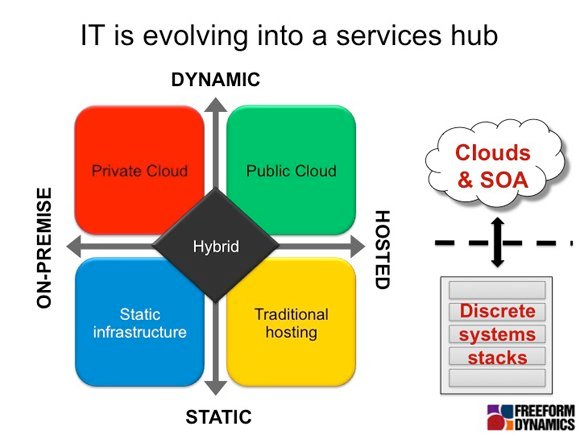 This hybrid cloud approach is a tricky and complex thing to do at the moment, but technology and standards are developing quickly to make it more workable and predictable.

The result of this flexibility of sourcing is that IT is becoming less a technology provider and more a services hub, able to translate demanding business technology needs into a set of service requirements which will be fulfilled mainly from the datacentre and augmented by third party services.