This article can also be found in the Premium Editorial Download: CW ASEAN: CW ASEAN: Building a digital future

As a small city state with fewer than six million people and no natural resources to rely on, Singapore needs differentiation to prosper in the global economy. This, combined with a need to be efficient with its limited resources and space, has put digital technology high on the government agenda.

Since its independence in 1965, the nation has focused on specific industries. Initially, it used its strategic position in the world to develop as a sea hub, which is now the world’s second busiest.

It then turned to higher value manufacturing before focusing on services, especially those in the finance sector.

The nation has now put foundations in place to become a major user and supplier of digital services.

Launchpad for a digital future

The restructure reflects the blurring of lines between IT and media. The Singaporean government hopes the organisation will help businesses, workers and the local community ride the current global transformation wave, where digital technology is being adopted by consumers, governments and businesses.

In a separate but intrinsic announcement, the Singapore government has announced GovTech, a new department focusing on government IT that will attempt to transform the delivery of public services by creating citizen-friendly digital government services and managing the government’s IT infrastructure. Both this and the IMDA support Singapore’s ambitions to become a smart nation. 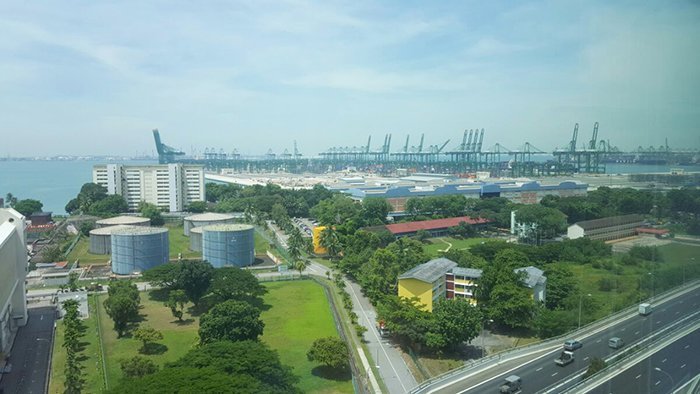 By coordinating citizens, business and government, the IMDA will help design an education system to ensure Singapore prospers in a digital economy, create legislation that is fit for a digital world, and work with organisations to help them use digital technologies to overcome their challenges.

For example, the IMDA will instigate and coordinate digital pilots in vertical sectors and take the initial risks involved with investing in pilot projects. Once concepts are proven, organisations across sectors can benefit from these technologies and methods without the up-front risks.

According to the Singapore Ministry of Communications and Information, the Infocomm Media 2025 vision will see Singapore become “a place where infocomm media enables a better quality of life for our people through world-class connectivity, compelling local content, and technologies to make everyday lives smoother and more convenient”.

It also has plans for the nation to be a “living lab” for entrepreneurs, growth companies and multinationals in the infocomm media space to allow them to experiment and innovate to contribute to economic growth.

In economic and social transformation, the IMDA will look at potential applications of information and communications (infocomm) media in areas such as health, education, community and social services, as well transport, financial services, logistics, manufacturing and e-commerce. It will reskill the Singaporean workforce for high-value infocomm media jobs.

Speaking at the launch of the organisation, IMDA’s CEO Gabriel Lim said the organisation was spurred on by the convergence of infocomm and media. “[The IMDA] will shepherd and lead Singapore in a future where there will be far more convergence, technology will be far more pervasive, and digital disruption and digital transformation will fundamentally change the way we work,” he said.

“Despite uncertainties around digital disruption, there are many opportunities to be reaped,” added Lim. “For the workforce, the IMDA will look at how to equip citizens with more skills to achieve in a world where convergence and digitisation will become far more important.”

For communities, he said the IMDA would try to prevent a digital divide where parts of the community get left behind. “Everyone, including vulnerable groups and low-income households, must be part of this journey,” he said.

He said the IMDA will support Singapore in emulating some of its past success with digital IT and media. “If you look at Singapore’s growth and development since independence, one thing we have done well is ride every successive wave of transformation and position ourselves for growth,” said Lim. “With a strong infocomm media sector, we can generate opportunities in other ones. We’ve been working very closely on projects with our SMEs and stakeholders to identify companies with the right capabilities, support them and scale them up.”

The IMDA is running projects through its labs to help local organisations overcome operational challenges with technology. It takes on the cost of testing concepts to remove the burden of risk from the organisations that might ultimately benefit.

One example is how the IMDA lab tested an idea to use drones to deliver mail to a remote island off Singapore. With the island’s postman of 40 years about to retire, the IMDA supported Singapore Post in piloting drones (example pictured below) to deliver letters and parcels to the inhabitants of Pulau Ubin Island. This would replace the need for a boat crossing.

“Most of Singapore is densely packed, but we also have a remote community offshore. We wanted to see how we could make efficient deliveries to the island. We piloted the use of drones because the fact we were helping brought the risk of the experiment down. We proved the concept, so the postal service could look at how to scale it up for commercial purposes,” said Angeline Poh, assistant CEO, at IMDA. 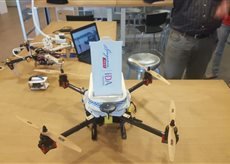 Another project sees the IMDA work with technology firms to find ways of improving logistics. The urban logistics project will enable deliveries to shopping malls to be better coordinated through digital platforms, reducing congestion, costs, waiting times and emissions while speeding up deliveries. The project is being run at Singapore’s Bedok and Tampines Malls, and will be expanded when complete. For example, the IMDA is working with IT firm Gursoft to develop systems for scheduling deliveries and managing queues. It’s also working with Ascent Solutions to create electronic locks for delivery units to secure and track deliveries.

The IMDA is also running 30 projects across Singapore to use smart technology such as analytics, sensors and predictive maintenance in facilities management. This is to address a shortage of workers in the security, cleaning, landscaping and facilities management sectors.

Other programmes being run with IMDA support include the use of virtual reality in the healthcare sector to train surgeons, for example, as well as allowing schoolchildren to experience things from their classrooms using virtual reality.

Without the IMDA managing these projects, this level of collaboration would not be possible due to the higher risk it would pose to individual organisations.

“I was fortunate enough to see how the IMDA engaged the finance sector to explore the use of blockchain technology some years ago, despite few in the finance sector having heard of blockchain. Today, Singapore has spearheaded different blockchain-related proof of concepts to digitise trade, and such innovations are capable of having a large impact on the way domestic and cross-border trades are conducted,” said Tan.

“The proof of concept exercises were a huge success because IMDA was there to provide technology domain expertise and work in conjunction with sector experts provided by the Monetary Authority of Singapore. It was clear from the start the proof of concepts had to be commercially oriented. As such, the participating banks were encouraged to apply the blockchain technology to solve real-world problems and focus on solutions that can be commercially viable in the marketplace,” he added.

“I believe Singapore is seen as an innovative global city because of its ability to harness the best of what technology can provide, whereby IMDA is always working in close partnership with sector experts from different government organs,” said Tan.

“As the progeny of two very progressive agencies – the IDA and MCI, both of which took on the roles of industry developer and regulator in Singapore, as well its new inclusive mission – the IMDA stands out,” said Wadivkar.

“IMDA’s parent agencies actively played the role of catalyst to seed innovation in Singapore in the past. We, at Standard Chartered Bank, have been direct beneficiaries. Jointly with another bank and IDA, we created the world’s first application of distributed ledger technology to trade finance,” he added.

The IMDA also plays a critical role in schools. Part of its remit includes developing a workforce for the future at an early age.

Speaking at a pre-school where children are being introduced to the basics of computing through toys, Adrian Lim, director of education at IMDA, said: “We want the citizens of Singapore to have the digital skills needed to work, live and play in a digital economy. We think it’s important to start them young.”

Lim said this involves more than just handing iPads to five-year-olds. “You don’t want to throw an iPad at them and have them stare at it.”

He described seeing children in pushchairs in the US and Europe with iPads on a special mount in front of them to keep them entertained. “I think this is scary because the iPad is being used to keep the child quiet,” he said.

“We don’t want to introduce technology to kids that is too advanced, because we want them to interact with it and cultivate their creativity. This does not mean giving them some of the technologies Silicon Valley is trying to push on the world,” added Lim. “We decided from the age of four to six to focus on less screen-based learning and make things play orientated to encourage them to work together.”

The IMDA encourages the use of what he described as tech toys. These include Circuit Stickers, which are circuit boards that use magnets instead of soldering, and the Bee Bot robot, which you can make move to a certain point, teaching sequencing through pressing buttons in an order before setting it off. 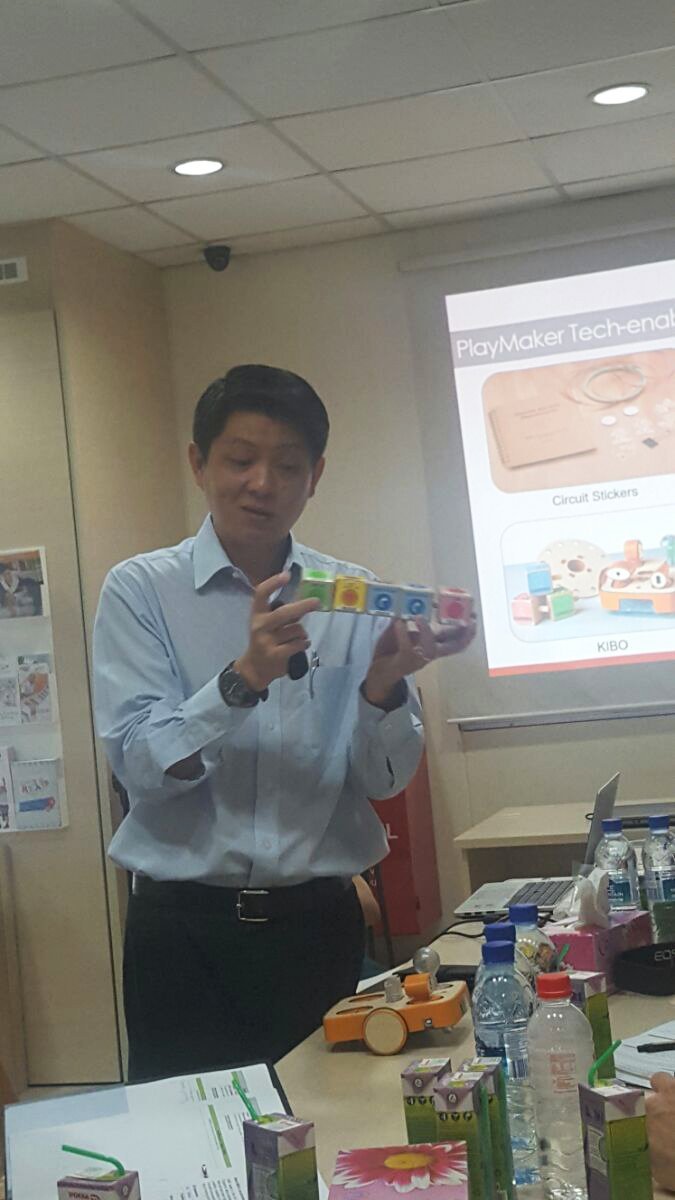 Lim also demonstrated the Kibo robot, which can be controlled using block programing. “There are no screens and these tools are age and development appropriate,” he said.

The IMDA has 160 pre-schools on the programme. Teachers were trained to use the equipment and there is tech support on-site. “Tech is the easy part, but getting the teachers to use it meaningfully is challenging,” said Lim.

Beyond pre-school, the IMDA is involved with various educational programmes and provides guidence for schools that focus on infocomm and media.

Programmes such as [email protected] Movement and Code for Fun offer primary and secondary school students exposure to coding and computational thinking.

The IMDA also provides direct guidance and support to schools that choose to focus on computing on top of the core subjects all schools do.

One of these schools is Clementi Town Secondary School in Singapore, which has about 1,000 students aged between 13 and 17.

Helen Tan-Lee, the school principal, said all schools in Singapore have to do core subjects, known as Learning for Life, but also choose an applied learning programme, which is individual to the school.

Clementi, with support from the IMDA, has chosen computing. “After looking at our profile, we have chosen our applied learning programme to be related to computing and coding,” said Tan-Lee.

“We want to give all our students a basic foundation in what coding and computing is. We want to expose them to what’s out there in computer science and hopefully ignite their interest in the process. Hopefully some of them will consider it a field they can grow in,” she added.

The school is conscious that technology moves fast. “What is relevant today may not be relevant in two years’ time, therefore the programme will encourage a disposition in students to always want to learn new things, explore and be open,” said Tan-Lee.

The IMDA also has mobile labs that visit schools to introduce them to technology. It holds workshops at schools for about a week at a time in attempt to get students to create technology rather than just consume it.

Read more about the IMDA