In spite of all the hype in the industry around cloud computing, UK IT decision-makers are not prepared to put applications in the cloud.

A new study conducted by Alcatel-Lucent reported that the UK is falling behind leading countries in cloud adoption.

The report found that India is already the leader in external cloud and expects to expand its cloud use even further, while the UK will drop behind, with the least growth in cloud adoption over the next three years.

In those businesses using cloud services, IT decision-makers in the UK were the most reluctant adopters (48%). 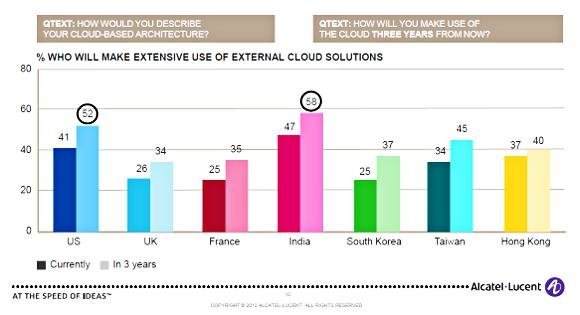 The UK and France had the lowest percentage of those that "strongly agree" to both the pro and anti-cloud statements. This, along with the low satisfaction rates of cloud computing, shows the malaise towards cloud, according to Alcatel-Lucent.