The days of the multi-year, single supplier megadeal are over. The current economic uncertainty is leading many organisations to re-evaluate how and what they outsource. Research tracking trends in outsourcing contracts during 2011 is showing a distinct shift away from business process outsourcing (BPO), towards lower-value, smaller contracts, which often involve managing multiple suppliers.

Analyst Gartner is seeing evidence of organisations willing to change providers. In its Forecast Analysis for the outsourcing market 2011-2015, for the third quarter 2011, the analyst says clients are more willing than ever to change providers when not highly satisfied with the incumbent provider and offered a compelling price.

Looking at contracts over €20m in Emea, sourcing advisor TPI reports that in the past few years the number of outsourcing contracts across the globe has steadily increased, although values have been falling.

The number of global contracts valued at €20m or more reached a record high in 2009 of 831, a 23% increase on the 623 contracts recorded in 2008. Last year, the number of these contracts dipped slightly to 764. In addition, total contract values in the UK and Ireland have fallen since 2008. Overall, TPI has witnessed a large increase in the number of multi-sourcing contracts in the past couple of years. 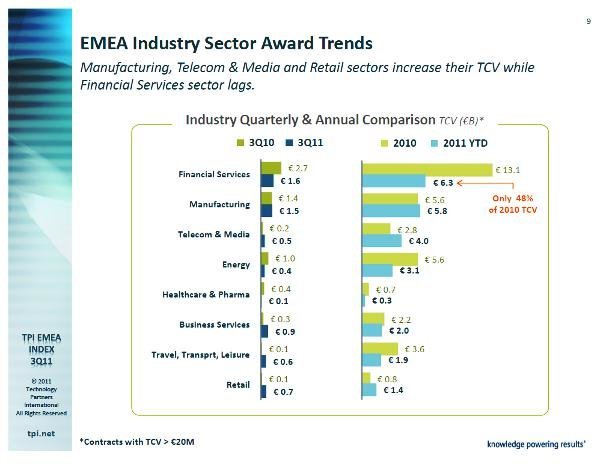 TPI’s research focused on the private sector. “In the UK, we will see a modest improvement in 2011, compared with 2010, but some way off where it used to be,” said Duncan Aitchison, president of TPI Emea. The sourcing advisor expects the total value of outsourcing contracts worth over €20m will be €12bn for the full year. At its peak, the UK outsourcing market was valued at €16bn.

Given the economic uncertainty, there are a number of drivers that may show where outsourcing is heading over the next 12 months.

Aitchison says there is a low level of BPO activity. In business process outsourcing (BPO), total contract value in Emea fell 5% year-over-year and 31% sequentially. “We have had a progressive trend towards a higher volume of smaller transactions, and a distinct shift to a multi-source strategy, where users break up requirements into smaller contracts with shorter terms,” he says.

Given the volatility in the UK, Europe and across the world, corporations are more nervous of transformation programmes, so big systems integration projects and BPO are less popular. In fact, Aitchison says outsourcing does not fare well at times of uncertainty, due to a move towards quick implementations, with faster payback, in contrast to the large, complex, multi-year programmes that were the norm a few years back.

Traditionally, clients would have transferred assets to the outsourcer. Aitchison says contracts today appear to be less asset-intensive. Similarly, the continued use of offshore suppliers is exerting downward pressure on the cost of contracts, he notes.

Any assessment and analysis of the outsourcing market is incomplete without mentioning the offshore category.

Offshore work – traditionally to India – has been used to lower the cost of software development projects, testing, support and maintaining legacy systems.

Lee Ayling, a partner in KPMG’s sourcing advisory, is seeing a rebalance between offshore (70%) to onshore (30%) from the 90:10 ratio last year. “Organisations are bringing more onshore," he says. "This is being driven by the complexity of programmes that often require an onshore presence to interface with the business.”

When McKinsey looked at the outsourcing market in August 2010, it identified a growing demand for onshore services, often in regions outside capital cities.

“Beyond lower wages, these regions offer skilled engineers in specialised areas where demand is high, such as infrastructure management or application development and maintenance for new and legacy IT systems,” the McKinsey Quarterly’s IT services: The new allure of onshore locales, reported.

McKinsey found that some organisations were under pressure to diversify their portfolios of global IT service facilities. “Many companies are heavily weighted in just one or two offshore regions, which exposes those companies to inflationary pressures and currency volatility,” according to McKinsey.

McKinsey also notes that in certain, highly specialised areas, organisations are opting to develop and retain the work in low-cost near-shore locations. “This development is driven by the ability to procure and develop these scarcer skills in locations where a regular supply of them is available, and at a cost-competitive price relative to offshore locations.”

Aitchison is seeing outsourcers locked in a battle to offer better propositions to clients. Along with the Indian outsourcers, he says most organisations operating around the world have offshore capabilities. “Many vendors, particularly Western companies, have delivered offshore capabilities, so there is no longer a huge disparity from India.”

Cloud computing is also changing the outsourcing market. “Our research among CIOs shows that 80% have plans underway. However a lot of projects are small-scale and pilots,” he says.

Aitchison notes that most outsourcers are orientating their services towards cloud-like services – reflected in commercial contracts that are priced on a utility basis.

Technology such as virtualisation is also changing costs. “There are still questions on how much you can virtualise, and there is still a lot of work users have to do in terms of consolidation and rationalisation, which are important to leverage utility platforms,” he says.

The move to multi-sourcing means organisations are splitting application outsourcing and infrastructure. “Current deals are being split up using two to three providers,” says KPMG's Ayling. There may be one provider for infrastructure, while a business may take on two outsourcers for application outsourcing, playing one off against the other. In certain sectors, such as consumer packaged goods, firms are bring services back in-house.

In the Forrester paper The Changing Outsourcing Environment, Forrester principal analyst Bill Martorelli says that multi-sourcing means CIOs should look towards developing more strategic supplier relationships, with higher levels of governance effort: "More outsourcing customers describe themselves as embracing a selective approach to outsourcing, one that relies on multiple providers.”

He says many existing IT outsourcing contracts based on a single-provider model are now being “refitted” to reflect the multi-sourced approach. “While multi-sourcing may not necessarily mean more vendors, it does result in the need to identify the most strategic, and most tactical, vendor relationships.” If any shortcomings in governance are present, the stress of attaining value across these strategic and tactical supplier tiers will result in strained outsourcing relationships, Martorelli warns.

In May 2011, EquaTerra, the sourcing advisory service that is now part of KPMG, conducted a survey in conjunction with the National Outsourcing Association (NOA), which looked at innovation in outsourcing. The report, Driving innovation through collaboration, found that outsourcing buyers are not yet taking innovation seriously enough. This is not surprising given that contracts in 2011 have shifted towards multi-sourcing, with fewer large strategic contracts.

In the report, along with co-author Karene House, principal advisor at KPMG, Ayling says users and service providers agreed that improving quality and lowering costs are the most important, closely followed by decreasing time-to-market and replacing old legacy systems.

In the report, the authors warn that the challenge when it comes to funding any model, other than innovation being baked into the contract, is getting agreement to fund failure. According to Ayling and House, this is a key requirement if you are going to achieve revolution rather than just evolution.

Clearly, outsourcing in 2011 is reflecting the uncertainty in the global economy. Outsourcers are under increasing pressure from offshore providers, plus new players operating using cloud-based infrastructure. For datacentre hosting services, outsourcers are beginning to use virtualisation to offer private cloud services. But the cost benefits of virtualisation can only be realised once the user organisation has rationalised and consolidated its IT server and application estate.

The experts Computer weekly have spoken to are seeing a migration from large contracts to smaller, multi-supplier deals. And the advent of cloud computing is driving utility-based pricing, even if the back-end services are not running as cloud services.