UK IT community rocked but keeping calm in face of Brexit 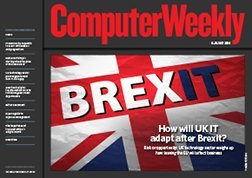 The UK IT community, users and suppliers, have reacted with alarm, fortified by some sangfroid, to the majority decision of the British people to leave the European Union (EU), in the Referendum of 23 June 2016. Julian David, CEO of IT industry trade body techUK, said: “Today the British public has decided that the UK should leave the European Union. This is not the outcome that the majority of techUK members were hoping for. It opens up many uncertainties about the future. “However, the UK tech sector will play its part in helping the UK to prepare, adapt and thrive in a future outside the European Union.” But, he warned: “Without the benefits of EU membership, the UK needs to be at its very best to succeed.” More on the user side of the IT community, the BCS issued a statement saying: “This is the start of a long process for the country. For BCS, it is the beginning of a dialogue, led by members, but facing towards our society, to develop a shared vision for the UK’s digital future outside the European Union.” BCS CEO Paul ...