Custom application development is also still showing strong interest, according to the TechTarget/Computer Weekly IT Spending Priorities survey for 2014.

The global survey’s European sample slice was 1,319 IT professionals, of whom 299 were UK-based. Some 26% were in application development,13% in application management, and 85% described themselves as working in corporate IT.

Software overall will see the biggest increase in expenditure – 52% in Europe as a whole, and 55% in the UK.

The next highest area for increased spend is hardware – 49% across Europe and 50% in the UK.

The biggest operational focus for IT strategy is expanding IT to support business growth – 29% across Europe and 30% in the UK.

To make that happen more easily, IT seems intent on increasing investment in packaged business applications. This is especially the case in the UK, at 24%, as opposed to Europe as a whole at 16%.

Breaking those applications out reveals a significant increase in the implementation or upgrading of ERP systems – 59% in Europe in 2014, in contrast to 43% in 2013. 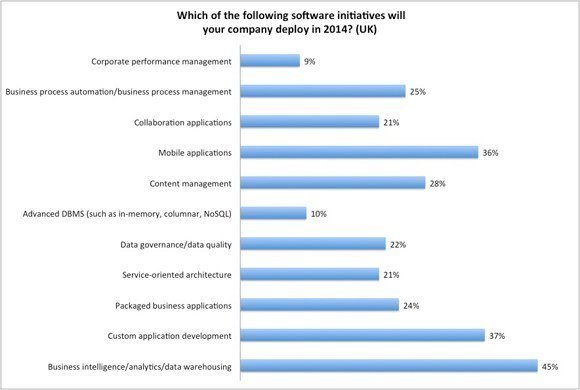 Spending on financial applications seems to have declined, from 44% in 2013 to 37% in 2014. Those investing in manufacturing software and marketing automation remain similar, within a band of 14-16% regarding the former, and a band of 11-12% for the latter. 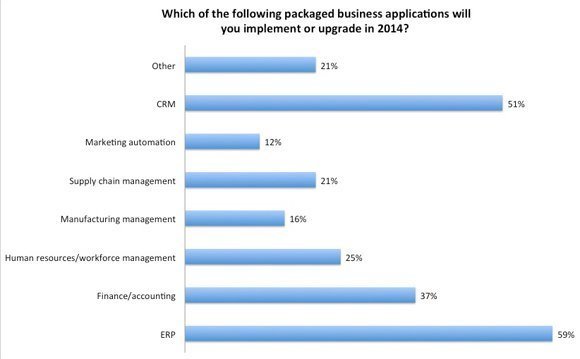 Other stand-outs from the survey: