Even governments seem to have a growing fondness for open source, open standards and more competitive markets for software. Ubuntu, an open source operating system for the PC, tablet and smartphone, was voted as a technology of the year by Infoworld – it was even cited as rivalling Windows. And according to analyst Gartner, the open source Android has become the dominant smartphone operating system.

From any reasonable perspective, the world of open source is booming – the golden years would appear to be approaching or even upon us.

When Linus Torvalds launched the Linux project back in 1991, few people could have imagined that free software developed by open communities would ever match, let alone surpass, the efforts of industry software giants. Yet, in a wide range of areas this has been precisely the case and we are all the better for it.

Without the contributions of Linux, Apache, Perl, Python, MySQL and countless other initiatives, the internet would be a smaller, less interesting and more expensive place. From big data to cloud to car "infotainment" systems, the open source world has spread far and wide.

So, if open source is everywhere, rapidly growing and dominating many industries, should the answer to every IT question be "open source"? Is it the new norm?

Some of the most successful and rapidly growing companies in the world use and provide open source. However, make no mistake, these efforts are not just random as in, “let us open source everything”, but appear directed, with purpose and with the intention to change a market.

This is the question I examined last year in my research project for the Leading Edge Forum. I conducted a detailed survey of over 150 companies and their attitudes towards open source. The vast majority of the companies used open source (over 80%), whether traditional enterprises or leading Web 2.0 companies.

The strongest indicator of success was not the use of open as a way of competing, but instead the level of strategic play

However, when asked the question of whether the company deployed open approaches - whether source, data, APIs or hardware - as a means of outcompeting competitors, then a stark difference appeared. Over 50% of leading Web 2.0 companies strongly agreed they had done this, while less than 10% of traditional enterprise had done so.

Why the big difference, if the rates of consumption were so similar?

Many of these Web 2.0 companies had high levels of strategic play, by which I mean they considered theirs and competitors' value chains in the decisions they made. Open source was seen as more of a tool to manipulate the market and create favourable circumstances, rather than a goal in itself.

The reasons for providing systems as open varied with the circumstance – from recruitment, to standardising an industry, to protecting an existing value chain, to undermining a competitor, to reducing cost, to encouraging innovation, and more. It’s quite a long list.

Many of the more traditional enterprises had low levels of strategic play. The differences were so stark that I took the survey data and mapped out the level of strategic play versus the use of open as a way of competing - for example, provision of open source, open data, open APIs.

Four basic groups of companies appeared and these are shown below: 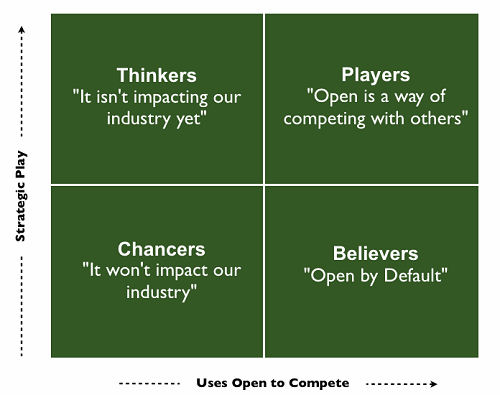 Players: These companies use open technology as a means to compete and think clearly about the impact of choices on their – and competitors’ – value chains.

Thinkers: While these companies tend not to use open technology to compete, they do consider impacts on their – and competitors’ – value chains in decisions they make.

Chancers: This group ranks lows on both axes despite many of the companies being aware of the games being played against them. They often believe that open technology won’t impact them and this group is most likely to make ad hoc technology, operational and implementation choices.

To be open or not to be – that is the question

Why great companies die - repeatedly - and is Microsoft next?

What businesses should learn from Web 2.0

In terms of market capitalisation over the last five years, the Players were the most successful, with the Chancers and Believers being the least. While open source is a growing phenomenon and a powerful tool, the strongest indicator of success was not the use of open as a way of competing, but instead the level of strategic play and consideration of one’s own and competitors’ value chains.

Of course, the most successful do both – they are highly strategic and they use open as the weapon it is.

Simon Wardley is a researcher for CSC’s Leading Edge Forum, a global research and advisory service for CIOs and their teams. Download the complimentary executive summary from Simon’s latest research project, Beware of Geeks Bearing Gifts: Strategies for an Increasingly Open Economy.