Patients whose data went missing due to IT problems at a north London hospital trust have been put at risk, an MP claims.

Enfield Town MP Joan Ryan said 77 patients had been deemed as suffering moderate harm, while one had suffered “severe harm”, because of delays getting treatment.

In 2013-14, Barnet and Chase Farm Hospital in Enfield suffered “serious IT problems which resulted in thousands of patients going missing from the computer system following referrals for treatment by their GP to the trust”, she said.

In a statement to Computer Weekly, Royal Free said NHS trusts throughout the country were experiencing similar problems following changes to referral to treatment (RTT) rules, which govern waiting times for patients.

The patient administration database and Barnet and Chase – supplied by Cerner and hosted by BT – was “too basic” to comply with the changes.

“This, combined with shortcomings in some oversight and scrutiny procedures, means that a patient’s journey was not always visible as a whole, and breaches were not always reported,” said the Royal Free London NHS Foundation Trust.

Royal Free set up a programme board to identify the affected patients and review their cases.

By May 2015 experts had looked at 10,000 cases. Of these, 4,000 were deemed to have had suffered a low risk of harm due to the delays, with 6,000 considered to have suffered no harm. However, 77 patients experienced moderate risk of harm and one patient suffered severe risk.

The delays did not affect treatment, said the trust.

The trust’s chief operating officer, Kate Slemeck, said the patient concerned had been managed and investigated under the trust’s serious incident process.

According to an update Slemeck presented to the trust’s board in June 2015, a review by an independent expert had concluded that the delays had not led to severe harm to patients, because earlier treatment would not have changed the outcome.

The review established that, for two people who had died, “there was no connection between the delay in treatment and the patients’ death.”

“Twelve patients had contacted the trust having received a clinical harm letter, of whom eight had requested a meeting and four were satisfied with the telephone conversation,” she said.

One patient at risk of serious harm

By 10 September 2015, 776 patients had received clinical harm reviews, identifying a total of 380 patients classified as at low risk of harm, who were sent a written letter of apology, 90 as at moderate harm, and one at serious harm, according to a board update.

“Patients who have been waiting the longest for treatment and outpatient appointments continue to be prioritised and treated alongside those with an urgent clinical need,” the board was told.

The trust said it put a patient-tracking system in place to identify follow-up appointments and stitch together every part of a patient’s journey, from the GP referral date to the date the patient was treated.

“We have made a significant investment to establish a sustainable system, including a comprehensive training programme, which will ensure the trust continues to comply with referral to treatment rules,” said Slemeck.

In a letter to the trust’s chief executive David Sloman in August 2015, Labour MP Joan Ryan called for separate patient data to be published for each of the trust’s hospitals, and urged him to put in measures so that similar problems cannot occur again. 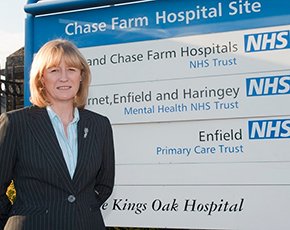 “This is a really important issue that has had implications for thousands of people in Enfield and elsewhere, particularly for those put at risk of clinical harm due to delays in their treatment,” she said.

“All those affected deserve an apology and to know what happened and why.”

An analytics company helped managers and clinicians validate what procedures patients were waiting for, how long they had waited for and if they were still waiting for treatment.

As a result of this exercise Royal Free said it has invested in the most advanced IT system on the market.

“We are very sorry if any of our patients have to wait longer than is appropriate for their treatment,” it said.

Read more on Healthcare and NHS IT