Online retail spend figures are estimated to reach £10bn in December this year, a record figure according to research by IMRG and Capgemini.

During the November and December period of 2013, IMRG and Capgemini have estimated that consumer online retail spend will reach a total of £20.4bn.

Although this period in the year is always a busy time for online retail, it will be the first time that December online retail figures will have broken the £10bn mark, according to the analysis.

As a result of the busy Christmas period, retailers have begun to offer consumers several means of obtaining goods quickly, including next-day delivery and guaranteed delivery before Christmas day, all of which takes a lot of planning.

A number of retailers have estimated their “peak week” for online retail sales, with the week commencing 9 December being the most popular.

Chris Webster, head of retail consulting and technology at Capgemini, said mobile devices have had a part to play in this increase in online sales. 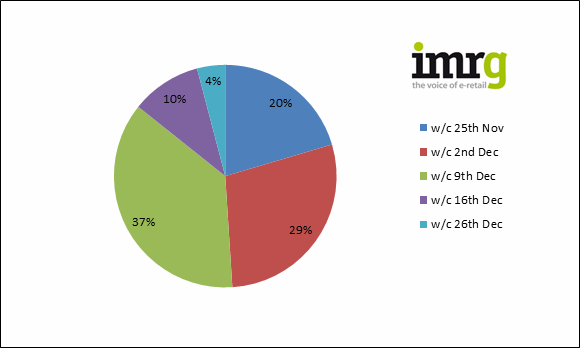 “The impact of mobile devices in 2013 has been very significant, and this forecast is in direct response to the overwhelming growth we have seen in sales via tablets and smartphones over the last few years,” he said.

The research found that due to the increase in platforms available for online shopping, the number of people who go from browsing to purchasing has increased by 5%.

“The increase in the number of browsers who convert to buyers is positive news for retailers as they gear up for the key festive trading period, with the average conversion rate expected to reach pre-recession levels during the fourth quarter," said Tina Spooner, CIO at IMRG.

Download this free report which assesses the online presence of 36 of the UK's leading high street retailers.

"Already we are seeing a number of retailers ramping up their online offering in the run-up to Christmas. Click & collect, next-day delivery and even one-hour delivery slots are just a few of the options on offer to attract the lucrative festive shopper at this highly competitive time of year,” she said.