Next-generation mobile internet is set to stall, with a lack of global standardisation due to online spectrum auctions and licence renewals, the GSMA has warned.

In its Global LTE Network Forecasts and Assumptions report, the organisation predicts that there will be 38 different spectrum frequency combinations used in LTE deployments by 2015, which will present a key challenge for the emerging LTE ecosystem.

GSMA said the fragmentation could potentially prevent supplies from delivering globally compatible LTE products such as devices and chipsets, or requiring them to increase prices.

"Spectrum fragmentation has the potential to hinder global LTE roaming if device manufacturers are required to include support for many disparate frequencies in their devices," said wireless intelligence senior analyst and report author Joss Gillet.

"Given the backwards compatibility already required for either HSPA or EV-DO connectivity, we are unlikely to see a 'world' device in a handset form-factor soon." 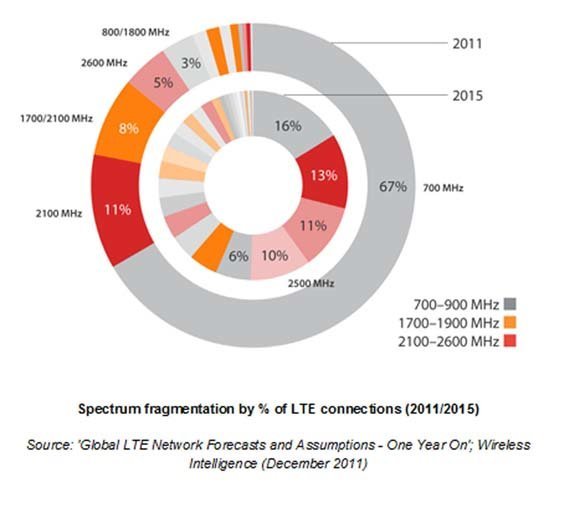 The report forecasts that there will be more than 200 live LTE networks in over 70 countries by 2015, up from 40 networks in 24 countries today, while the number of LTE connections is forecast to grow from seven million in 2011 to close to 300 million by 2015.

More than two-thirds of global LTE connections today relate to deployments at 700MHz due to the large-scale rollouts underway in the US. Asia Pacific has the most varied spectral combinations of all the global regions, despite significant support for LTE at 2100MHz (Japan), 2500MHz (China) and 1800MHz (Southeast Asia). Asia Pacific, Africa and the Middle East will represent a joint 50% of global LTE connections by 2015.

Spectrum fragmentation is set to increase over the next four years as more LTE networks are deployed in the digital dividend (700/800MHz) and re-farmed frequency bands.

"Spectrum re-farming will grow in importance as operators await additional spectrum to be allocated by governments and regulators," said Gillet. "Our research indicates that one-third of LTE operators around the globe will be unable to secure any additional spectrum in the 700, 800, 2500 or 2600MHz bands before 2016 at the earliest, which will further exacerbate data capacity issues and limit LTE coverage expansion plans."