NOTE: Tapestry will be free from October 2013 at the FlowForwarding.Org project site.

The tool itself is designed to gives network engineers a framework for understanding the complexity of networks and controlling network costs.

How the formula works…

Infoblox CTO Stuart Bailey and long-time research collaborator Prof. Robert Grossman have developed a formula for complexity that accounts for the number of endpoints on a network and how they interact to perform key business functions.

This method is counter to the “traditional approach” of counting the number of network infrastructure devices (such as routers) and mapping the wires that connect them.

According to Bailey and Grossman, “Tapestry software, which can be run on virtually any computer or set of computers, harnesses the Bailey-Grossman equation to generate a Network Complexity Index (NCI) number based on endpoint interaction data from network-wide control systems such as the Domain Name System (DNS).” 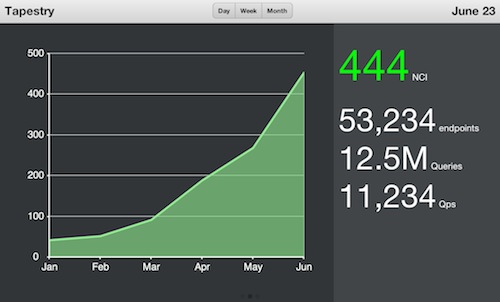 Complexity (rather than bandwidth) is the network barrier

“For the first time in the history of the networking industry, it is becoming clear that complexity rather than bandwidth is the barrier to network growth,” said Bailey. “Today, discussions about network complexity focus on the tangle of wires and boxes, rather than the relationship of business processes to an increasingly large, dynamic, and shared global IT infrastructure.

“The rapid change in network technology – including virtualisation, cloud, big data and machine-to-machine communications – make it essential to look at a bigger picture,” Bailey continued.