The marked slowdown in smartphone shipments around the world – widely held to be due to market saturation – is beginning to affect the cheaper Chinese suppliers that had seemed impervious to the problem, and even the normally bullet-proof Apple.

In their latest assessment of the market, covering both the fourth quarter and the full 12 months of 2015, mobile analysts at Juniper Research said they had seen the slowest fourth-quarter market growth since the immediate aftermath of the 2008 financial crisis, with Apple posting the slowest ever year-on-year growth in iPhone shipments of just 0.4%, although its performance across the full 12 months was better.

Across the full year, Samsung shipped an estimated 317 million devices, representing year-on-year growth of under 1%, and Microsoft’s shipments declined by 57% year-on-year to 4.5 million units.

Juniper said that even though Samsung retained its overall market lead, and booked a slight increase in shipments in the fourth quarter thanks to the success of its Note 5 device and new releases in developing markets, this was “only a mildly upbeat” finish to the year because, while its revenue mix was increasing, it was falling behind the market in terms of shipment growth.

Even Chinese supplier Xiaomi, frequently held up as an example of the type of insurgent company that has caused so much trouble for the likes of Samsung, missed its annual sales target in 2015. Huawei fared better. 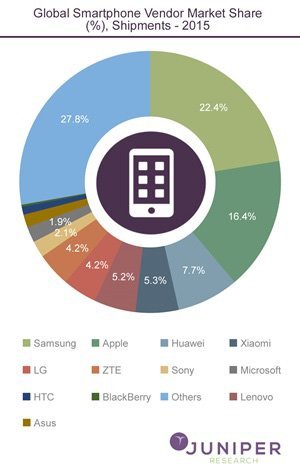 Similarly, LG saw less than 1% growth across its smartphone lines in 2015, and a decline in the fourth quarter. Sony was also much weaker, down 36% year-on-year in the last quarter of the year.

Juniper said it was now clear that there was no ecosystem yet devised that could insulate suppliers from the slowing market.

“As features become ‘good enough’ everywhere and subsidies end in the US, Juniper expects the market to slow further as Asian markets become saturated and American customers have to pay the full cost of their smartphones,” it forecast.