Computer Weekly is this week launching the sixth annual UKtech50, our definitive list of the movers and shakers in UK IT - the CIOs, industry executives, public servants and business leaders driving the role of technology in the UK economy.

Our aim is to identify the 50 most influential leaders in UK IT. Whoever comes on top of the list will be the person that, in the opinion of our expert judging panel and a reader vote, holds the most influence over the future of the UK IT sector in the next 12 months – and hence the future of IT professionals across the country.

Last year’s winner of the UKtech50 was Jane Moran, the global CIO at Unilever. Moran took over as CIO at the consumer goods giant in June 2014, after four years as CIO at Thomson Reuters. At Unilever, she is involved with some of the most innovative technology developments in industry – the internet of things, 3D printing and a programme to fund and work with technology startups. She is also a supporter of efforts to encourage more women into IT – in 2012 Computer Weekly readers voted her as the most influential woman in UK IT that year. At Unilever, Moran is helping to reshape one of the UK’s most important companies for the digital world.

Moran is bound to be a contender again, but who else will follow her into this year’s fold? There will be plenty of candidates from every sector of the UK. With a new Parliament in place – and the Government Digital Service losing its executive director, Mike Bracken, who finished fifth in last year’s UKtech50 – will a new digital leader from Whitehall prove the winner? As the digital revolution transforms businesses, will a CIO with game-changing IT strategies come to the fore? Or as startups grow across the country, is this the time to recognise a technology entrepreneur?

To coincide with the announcement of the 50 most influential leaders in UK IT, Computer Weekly is hosting a special event in London on Wednesday 2 December 2015 – it will be a must-attend meeting for any IT leaders looking to develop their own influence, to be inspired by their peers and to lead innovation in their organisation. Look out for more details soon.

If you would like to nominate anyone you feel warrants recognition as one of the 50 most influential people in UK IT, simply complete the form below and submit your suggested individual. Nominations must be received by 5pm on Friday 16 October 2015 to be eligible for the 2015 list.

Looking back at last year's UKtech50 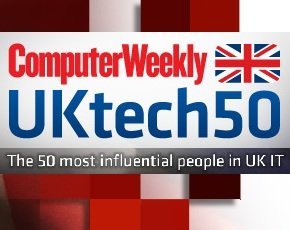 At least 12 of the 50 members of last year's UKtech50 list have changed jobs in the past 12 months, either through moving to new roles or, in some cases, by promotion to more senior positions.

The UKtech50 list will be decided by a judging panel representing every area of the UK IT profession – and we will ask readers to vote on who they think should top the list.

The panel has been chosen to represent different perspectives in IT – so each individual is acting both as an impartial and expert judge, as well as an advocate for their area of interest.

Our judging panel will select the top 50 candidates based on the following criteria: