The government needs to have more conversations with businesses of all shapes and sizes on a regional basis in order to capture the skills to deliver successful digital public services.

Procurement has changed in government over the last few years, after the Cabinet Office mandated "no more big IT" in government, with new contracts having to remain below a lifetime value of £100m.

And frameworks like the G-Cloud and the Digital Market Place have transformed the way government procures technology services, by allowing greater input from SMEs as well as including more companies from all over the UK, rather than just in the South West. 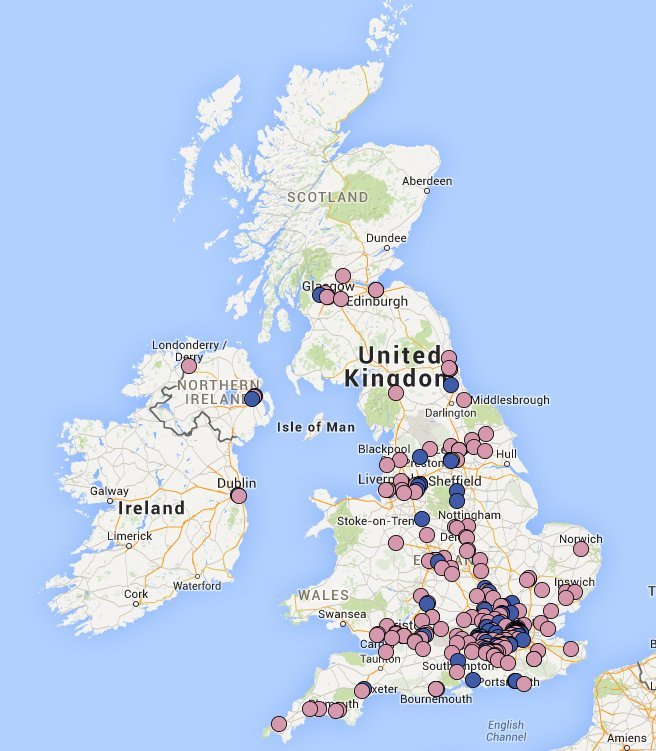 Map of G-cloud suppliers: The spending on G-Cloud up to 14 July 2014. Previously most suppliers were based around London and Reading, but this has now spread out. Pink dots represent SMEs, while blue dots represent large suppliers.

“We don’t filter by size, we want companies of all sizes,” said Bracken. “But largely procurement rules in the past saw the vast majority of our technology spending go to a handful of companies. That has number of damaging effects, not least giving the idea to smaller companies that they can’t deal with government,” he said.

He noted that, when the GDS began three years ago, it started engaging with suppliers differently. Now G-Cloud is in its sixth iteration and the second Digital Marketplace is coming up.

“It’s early days for all of us, but we’re improving month by month,” he said.

But Bracken said that, while these digital engagement tools are good, government still needs to have conversations with businesses.

“We need to be very close to those companies, whatever size and shape to help us create greater public services,” he said.

“Improving online services is one side, but the key ingredient but more important having the conversation local economy.”

GDS has been in the middle of a project to move 25 of the most used government services online in 400 working days. The ambitious project kicked off in January 2013, aiming to transform 25 services from visa applications to benefit claims – which were identified as the first “exemplars” to be redeveloped.

By the end of the 400-day period, the 25 exemplars should be live or in the last stage of public testing.

Following in the GDS's footsteps, some government departments have gone it alone – including the Ministry of Justice (MOJ), Her Majesty’s Revenue and Customs (HMRC) and Driver and Vehicle Licensing Agency (DVLA). As well as working on a number of the 25 exemplar projects, these departments have also been working on transforming other digital public services, with the MOJ in the middle of delivering 16 different products, including a new civil legal advice system and internal projects, while completing its fourth and final exemplar before the end of the year.

The initiative intends to connect the ecosystem of suppliers, government, universities and the wider Tech Hub network. The DVLA’s two-year sponsorship includes 50 desks in the Tech Hub building which will allow some of the DVLA’s digital and technology team who are digitising public services to work alongside startups in Swansea.

Having a base and a network in Swansea will encourage shared technology culture, common standards and open application programming interfaces (APIs) that will allow the public and private sector to work together, rather than in isolation.

Bracken noted that the partnership between DVLA and Tech Tube was part of a change in government approach that is happening all over the country. He noted HMRC working with different companies in Newcastle for the first time in a long time, as well as a big push by the DWP to use hubs in the North West corridor and particularly around Leeds.

“It is part of a wider national move to get companies into the public sector supply chain,” he said. “It’s not just an economic view, but it stimulates skills too.”

“The deeply annoying thing for me is that, in the UK, we’re really good at this stuff, and it’s annoying that for a long time we made it hard for our better people and companies to not take part in the public sector.”

Recently, the government-backed Tech City launched a TechNorth initiative to support startups in the north of England.