The new family of Haswell processors, launched at IDF 2014 today, is part of Intel’s strategy of re-architecting the datacentres.

The E5-2600 v3 is at the heart of an agile datacentre and is designed to enable compute, storage and networking to work better together, Larson said.

Intel Xeon E5 v3 is designed for software-defined architecture and comes with configurable switches for network and configurable storage to make everything automated.

“We are thinking of all the ingredients of datacentre when designing processors. We just don’t want to think about improving compute but also about storage and networking as storage and network are emerging as crucial bottlenecks within datacentres,” said Eoin McConnell, Xeon E5 product director.

But according to Gartner’s research director Sergis Mushell, integrating storage, compute and networking capabilities within a datacentre is not something that just Intel is doing. “The whole industry is moving in that direction,” Mushell told Computer Weekly.

“But Intel is taking this integrated approach as ARM is beginning to capture the datacentre from a storage and networking perspective if not from a server perspective,” Mushell said.

“Intel has a server lead but, as it is seeking growth, it is beginning to address other elements of the datacentre such as storage and network.”

For the architectural cycle, this launch represents the “tock” phase in Intel’s “tick-tock” model, where a "tick" is a shrinking of process technology of the previous microarchitecture and "tock" is a new microarchitecture. There is either a tick or tock from Intel every 18 months.

“Haswell is something that clients will definitely benefit from,” Mushell said. “It is a whole new architecture and is much more power efficient.” While a software-defined approach, addressing storage, networking and compute needs and DDR4 support are all the big highlights of Xeon E5-2600 v3, for Mushell what stands out the most is the chips’ “awareness around virtual machines (VMs)". 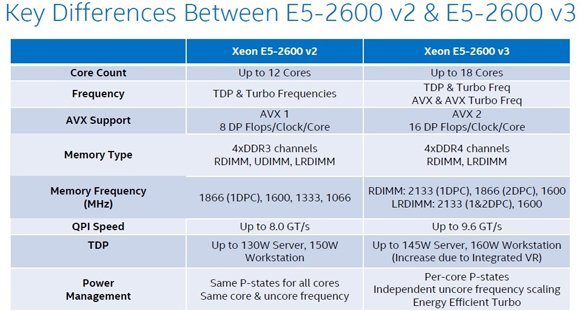 “One of the challenges today is to successfully run a workload in a multi-tenant environment,” said Intel’s software general manager Billy Cox at an Intel workshop on the Haswell-EP processors. “A limitation today is that IT is unable to directly mitigate impacts of an aggressor (noisy neighbor).”

Noisy neighbour refers to a bandwidth-hungry virtual machine that affects the performances of other VMs. Intel’s Haswell architecture helps identify “misbehaving application” and allows IT to reschedule VMs according to priority.

Xeon E5 v3 chips simplify the process of spotting the aggressors and managing them. “This feature was not prevalent in previous versions,” Cox said. “Now I know which VMs are noisy,” he said demonstrating a video where the noisiest VMs were the video transcoders (using high occupancy).

The processors include a Cache Monitor (Cache QoS) feature designed to improve service quality and utilisation.

“This noisy neighbor detection is a feature that enterprises will benefit the most from,” Mushell said. “The majority of servers within an enterprise datacentre are today virtualised and the ability to look at VMs’ performances and identify the noisy neighbours and act on them can drive efficiencies.

“This is something the enterprises will appreciate,” Mushell said.

Driving the transition to DDR4

“DDR4 is a new technology and we saw it as a critical step for us,” said Cox. “We had to find a way where we did not create overly power-consuming systems.” According to Cox, the industry took a long time to transition to DDR4 because it was more expensive but today its benefits outweigh the limitations. “Enterprises will be willing to buy it despite being expensive because if its features,” Cox said. “Only now, DDR4 is becoming economical.”

Many x86 server suppliers have launched software-defined and cloud-ready servers based on Intel’s latest Haswell chips.

HP has released the Gen9 version of its ProLiant servers, as part of its strategy to “re-imagine servers in the new compute era” based on E5-2600 v3 chips.

While launching the products, HP chief executive Meg Whitman said servers are at the heart of a datacentre, as the world moves towards software-defined datacentres (SDDC).

"Unfortunately, in the past 10 years servers have not kept pace with demand. They have slow market responsiveness and come at high costs,” she said. "This next phase significantly changes the radicals of the datacentre and represents the new era of compute that is defined by big data, mobility and cloud computing."

The server family is optimised for cloud and software-defined environments, and has new technology features, including DDR4 memory – which increases compute capacity; PCIe accelerators – and converged management features for servers, storage and networking.

“Xeon processors are Intel’s crown jewels and they are continuing their leadership in the high performing process technology with Xeon E5-2600 v3,” said Mushell.