Enterprises in Europe and the UK have been lagging behind in terms of accommodating for Bring-Your-Own-Device (BYOD) schemes, however they may be catching up with intentions to integrate devices into corporate networks.

The annual IT priorities survey from TechTarget and Computer Weekly, showed that 55% of IT managers want to accommodate end-user tablet devices and integrate them into the corporate network.

Rob Bamforth, principal analyst at Quocirca, said that companies have reacted to BYOD with mixed responses.

“Some think they need to do it to get workers on their side, they might try to recruit younger workers who would expect to bring their own devices,” he said. “The other side is a ‘they’ll get what they’re given’ attitude, which is still a problem, but the level of reluctance depends on the industry.”

“I think if 55% are trying to accommodate for BYOD, then that’s a strong figure, and Europe and the UK are catching up,” he said.

Just over a year ago, Quocirca research stated that only 25% of businesses allowed employees to use their own devices in the UK. “So what we’re seeing is a shift towards doing it proactively. It’s a positive embrace rather than reluctant adoption,” said Bamforth.

Bamforth said that organisations implement BYOD strategies to try and do the right thing for employees, rather than to reduce costs. “The cost of a device is only a fraction of the cost of delivering IT to an employee. There’s the management, infrastructure, education, security that all has a cost, but they slip under the radar.”

A further 29% of IT managers from the TechTarget and Computer Weekly study want to implement a dedicated device for mobile workers, such as truck drivers or warehouse personnel, while 17% wish to reduce the cost of end user computing for personnel with limited computer needs.

Additionally, 44% of IT managers would allow employees to purchase their own smartphones, while 30% would allow the purchase of employees’ own tablets for use on the corporate network, but only 21% would allow laptops or desktop to be purchase. 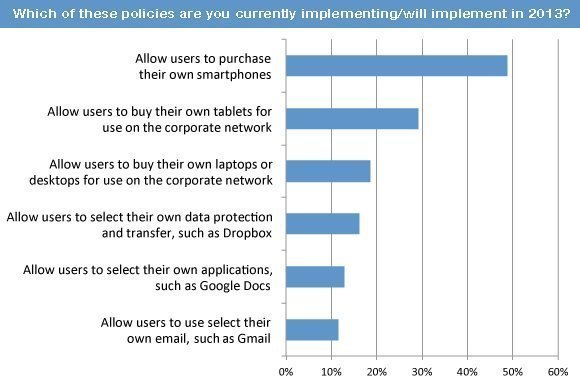