Almost 60% of IT executives have a plan in place to retire applications, according to a UK study by Accenture.

The survey of 250 IT executives and 250 business executives in companies with 1,000 or more staff found that the amount of IT budget being spent on legacy IT is not as much as some had predicted.

Overall, 76% of the executives surveyed said legacy IT accounted for up to 30% of their IT budgets – far lower than some industry estimates.

Over half of the IT executives surveyed (53%) said cloud computing would allow them to invest in IT without increasing capital expenditure. However, 53% also said they needed to address legacy IT systems which were limiting the agility and flexibility of their IT.

“Over the past year we have seen a drive to reduce IT costs. But there is still a hurdle with legacy IT,” said Stephen Nunn, managing director, infrastructure consulting group, Accenture. 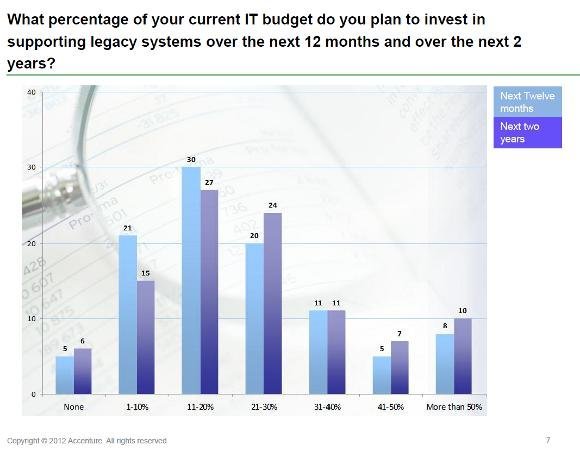 Investment in legacy IT

He added that when an application is moved into the cloud, it will need to communicate across a wide area network (WAN). This will have a different level of availability than the internal network. When linking legacy systems to cloud-based IT, he added, “you need to consider the business chain because the cloud has a different risk profile”.

“IT executives seeking to accelerate their journey to a more agile IT environment need to work closely with their business counterparts to determine whether to sustain, consolidate, modernise or retire each application that supports a core business function.

"Conducting an application rationalisation exercise based on the usual criteria, but also specific agile IT principles and suitability for cloud technology, will identify the best course of action and enable the benefits of agile IT to be realised,” Nunn added.