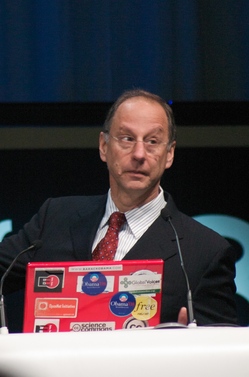 As it comes to a close, it’s interesing to think about it.

The whole idea has been to reduce information to make it manageable.

The HR system strips away everything that makes people interesting, all their quirks. In comparison, a Facebook page is a much richer view of the person. Hyperlinks are the opposite of information; they connect things in a rich, unstructured way.

Leadership has been based on scarcity. Jack Welch – paragon of leadership.

We treat it like a kind of heroism – the lonely leader, carrying the whole weight of the business on his broad, strong shoulders.

Strategy tries to turn something the future into something scare – but that’s the past. There are multiple numbers of futures. Flexibility may be better than having a strategy.

Leaders are realists – but relaists would never have built the web, wikipedia… Realism is over-rated.

Networks have the properties that we used to attribute to leaders.

Obama team put up a change.gove site. It wasn’t perfect, but it gets better everyday. It shows that the team understand the net.

No way of predicting in what the outcome will be – it’s a political struggle from work to national politics. No way to get through apart from getting through it.

The heroic leader idea is going to fall. There are great leaders – but not enough. We need more, and that will only happen with networks. We need a leadership that deals with abundance, and that uses it. Fewer leaders and more love!